AG Strange: EPA is ‘out of control’ 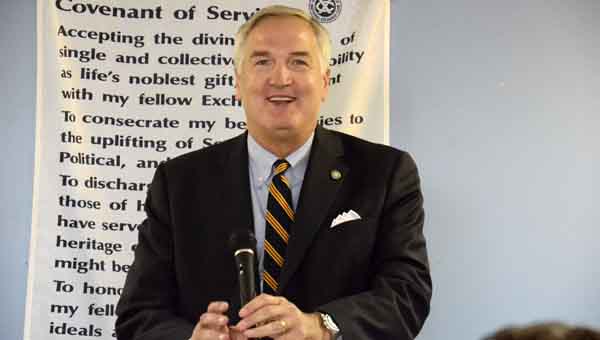 When Attorney General Luther Strange met with Pike County Republican Women Wednesday, he found himself fielding questions on everything from immigration to the Environmental Protection Agency.

Strange was more than happy to answer them. “I wouldn’t be attorney general if it weren’t for your support,” he said.

Strange is currently in a race for his second four-year term and is running against Democrat Joe Hubbard. He took issue with his opponent’s acceptance of $1 million from the Poarch Band of Creek Indians. Strange challenged the group’s rights to operate electronic bingo machines in three casinos owned and operated in Alabama. The case is currently in the court of appeals.

Strange said he and a group of 25 conservative attorney generals in the country would continue to challenge those who did not support the country’s rule of law, namely President Barrack Obama and the Environmental Protection Agency. “The EPA is an example of an agency that is out of control,” he said.

Strange testified Tuesday against the EPA’s proposed new rule limiting carbon emissions from power plants. He is one of nine attorney generals who have a lawsuit against the Obama administration’s proposed carbon rule and has said the EPA is unlawfully seeking to extend the scope of the Clean Water Act. If things did not change by next year, he and his group would sue the agency, Strange told members of PCRW.

He referred to the immigration issue as a humanitarian crisis. “But, it’s a direct result of our failure to support our rule of laws,” he said.

Strange said he loved his job and did what he could to protect and keep residents of Alabama safe.

He has a pet peeve: the litter he sees as he travels along the back roads of Alabama. To solve the problem, Strange said he would like to see every prisoner in the state cleaning the sides of the roads daily.

“I truly believe our children, our future grandchildren are going to look at us and say, ‘What were you doing to protect this country?’” he said.

Probate Judge Wes Allen thanked Strange for standing up for the Second Amendment and for marriage. Strange shared a story about his grandmother killing a beaver from 30 feet away. She carried a gun with her every day of her life.

Weed said he believed incumbent Curtis Blair could be beat. He also said he believed that every level of government should be operated with conservatives like himself. “I’d love to take back the courthouse. Wouldn’t it be great if we could have the courthouse back? I believe together we can make it happen,” he said.

Youngblood said he was fighting an uphill battle, combating rumors and lies. “The rumor mill is killing us in Pike County,” he said.

One of the biggest rumors he was still fighting was talk of him firing everyone in the sheriff’s office if elected. “It would be suicide for a mew sheriff to go and get rid of 100s of years of experience they, as a group, possess,” he said.

Youngblood said he was also fighting an uphill battle with people stealing his political signs and with the media who never call him. He asked for everyone’s help in getting the word out about his candidacy.

Youngblood said he would be willing to participate in a debate with Sheriff Russell Thomas if an impartial mediator could be found. “But it’s in his best interest not to debate me,” he added. “We’re inundated with drugs, guys. And now, my opponent can’t run on his reputation.”

Virginia Hamm, president of PCRW and interim president of the Pike County Republican Party, said everyone had a responsibility to assist candidates in the current campaign.

“There’s a battle going on and we need to be warriors for our candidates,” she said.