GUN SAFETY: PCSO teaches women how to protect themselves from an attack 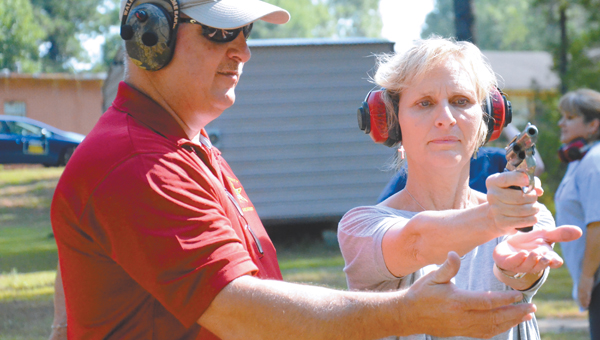 The Pike County Sheriff’s Office offered a gun safety class for women. Above, Sgt. Henry Wentland shows Kathy Pugh how to support her hand for a steady shot. Below right, Wentland runs drills with Pugh and Michele Seepersad to get them used to shooting a moving target and reacting quickly. The class included a lesson on rifles, below left.
MESSENGER PHOTOS | MONA MOORE

It’s been more than two years since the Pike County Sheriff’s Office was been inundated with requests for gun safety classes. Sgt. Henry Wentland said a series of rapes in the area had women looking for ways to protect themselves.

“We were doing two of them a week,” he said.

Since the world is no safer than it was then, the classes have continued. The sheriff’s office keeps a waiting list and when enough names are on it, Wentland and Deputy Kevin Childs schedule a free class.

“All we teach you to do is protect you and yours,” said Wentland. “It’s sad, today in these United States, you’ve got to sleep with your doors locked and a gun beside you.”

The class lasts two hours, but no one keeps time. Childs and Wentland tell the women repeatedly they will stay and shoot with them for as long as they want. They also offer to accompany their students to purchase a gun or ammunition.

“We just want you to be safe and have a good time. Shooting is a mind thing. Once you conquer it, you’ll have fun,” he told a class of nine women at Saturday’s class. “Most women are timid about a firearm, about 95 percent probably. But it’s a muscle memory. The more you shoot the more confident you’ll be.”

Amelia Long took the course with her daughter, Jodi. Her family has always hunted, but Amelia would not participate. She surprised her husband when she told him she planned to take the class and by herself a handgun.

“He said, ‘You and a guns don’t mix,’” she said. “The sound of the shot makes me jump, but I’m comfortable pulling the trigger.”

Saturday’s class gave Amelia and Jodi a chance to try out several handguns and find one they would feel comfortable using. The class started with an introduction to different calibers of firearms and the ammunition available.

Wentland offered the pros and cons of automatics and his gun recommendation for any woman. “My preference for a lady is a .38 Smith and Wesson,” he said. “It’ll shoot every time.”

The course included how to handle, load, unload and shoot a gun. Wentland and Childs ran drills to teach women how to move when under attack.

Wentland told the women they needed to be prepared to kill an attacker, not just scare him or her. “If you shoot somebody, you’re not shooting just to play with them,” he said. “If you shoot them, shoot till they fall.”

Some women came with weapons they owned and never used. Others wanted an introduction before purchasing a firearm.

“I don’t think you can ever really know too much,” she said. “I’ve been waiting on this for two years. I was able to get more comfortable with my automatic.”

Sarah Gambles encouraged her mother, co-workers and friends to take the course. Her original plan was to have a dozen fellow Banks School teachers join her. Gambles has shot a gun before, but she had a new rifle that she was not comfortable using.

Gambles’ mother, Christine was not hard to convince. She said she has wanted to learn to shoot for about a decade. “Eight or 10 years ago, when I was working retail in Montgomery, a man put a gun to my head,” she said. “That’s when I decided I need to learn to shoot.”

“I would recommend it to anybody,” she said. “And I wouldn’t mind going through the whole thing again.”

Wentland encouraged the women to return. He said people should practice shooting throughout the year and know how it feels in bulky coats or the heat of the summer. He will do his part by continuing to offer the class once or twice a month. Wentland said Sheriff Russell Thomas encouraged him to offer the class and provided an endless supply of ammunition. 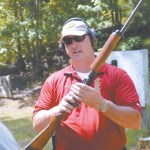 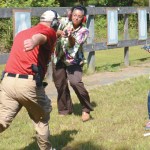