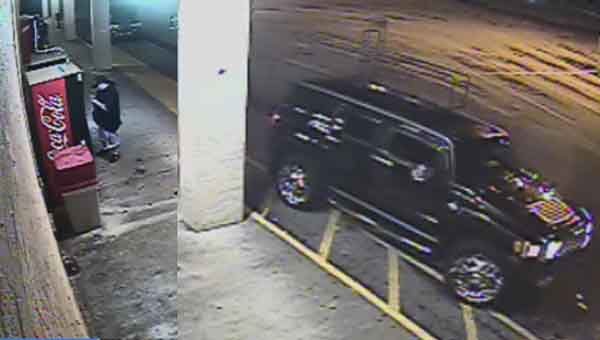 Suspects from this video surveillance of the Three Notch Road Piggly Wiggly match those from the Brundidge store.
Composite image/contributed

In fact, the suspects are also wanted in connection to a vending machine theft of the Piggly Wiggly machines located on North Three Notch Street.

Like Brundidge, the incident happened July 15 and three people in a black Hummer SUV were caught on tape.

“That’s my brother’s store,” said Steve Garrett. “They left my store and went there 20 minutes later.”

Because the machines were still operational after thieves emptied them, Three Notch Street did not discover the theft for several days.

Garrett offered $100 in groceries to anyone with information that leads to the arrest of the suspects. His brother has not made a similar offer.

The theft made the seventh time the Brundidge machines had been burgled. After the first two times Garrett got rid of the machines altogether. But, customers missed them and asked him to bring them back.

Since returning the machines, Garrett has done what he could to secure them. “We’ve had chains on them and padlocks. They just tear all of that off,” said Garrett.

The machines have an alarm on them. Brundidge Police was notified during the incident. Garrett said they arrived just after the thieves drove away.

Lt. Bryan Weed suspects there could be more vending machines that were targeted during that period. “They’re just the ones that have reported it,” he said.

Since the thefts were reported, the investigation has not produced a suspect. Weed said the video produced a clear image of the suspects. He has circulated the photo throughout Troy to no avail. “I haven’t had anyone recognize them,” he said.