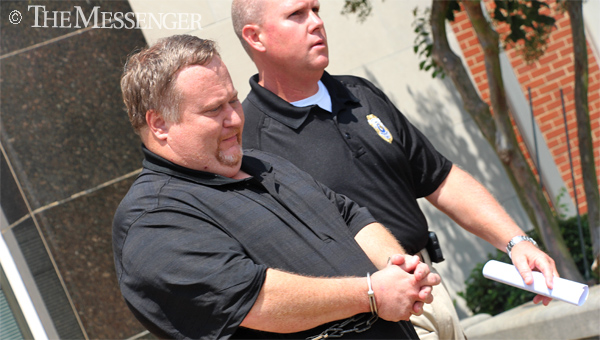 A Pensacola, Fla., man wanted in connection with three murders in Florida was captured without incident early Tuesday in Troy and has confessed to the deaths, authorities said.

Derrick Ray Thompson, 41, was arrested at a residence on County Road 1165, known as Good Hope Road, shortly after 5 a.m. Tuesday. He waved extradition and returned back to Florida, where he will be charged in the deaths of Panama City Beach nightclub owner Allen Johnson and the deaths of 60-year-old Steven Zackowski and 59-year-old Debra Zackowski, both of Milton.

“We received a call from the officials in Florida (on Monday) that he might be here,” said Lt. Bryan Weed of the Troy Police Department. “Our tactical team and the tactical team from the Pike County Sheriff’s Department set up outside the residence overnight and took him into custody (Tuesday) morning when he attempted to leave the residence.”

U.S. Marshals Service, the Montgomery County Sheriff’s Office and the Alabama Department of Public Safety were also involved in the operation.

No one was injured in the incident, although Thompson did have a rifle and several pistols in his possession at the time.

“He confessed to all three (murders),” said Pike County Sheriff Russell Thomas. “Drugs were involved. He had an addiction to Oxycontin.”

The saga began on July 19, when Thompson met with the Zackowskis at their house and in the course of the meeting, stole several items including keys, a cell phone and prescription drugs, according to a report filed with the Santa Rosa County Sheriff’s Department.

Thompson had been hired by Zackowski to perform electrical work on a construction project and the meeting was to discuss Thompson’s lack of performance, according to the report filed by Zackowski on Sunday. The victim told deputies he had excused himself to go the restroom and returned to find keys to his home and motorcycle missing, as well as a cell phone. He stepped outside in time to see Thompson exiting his truck and discovered that seven Oxycodone pills had been stolen.

The report prompted theft warrants to be issued against Thompson. Authorities discovered the couple’s bodies in their home later that day.

Thompson also has been named in the fatal shooting of Johnson, owner of Panama City Beach’s Show-N-Tail strip club and a former deputy. Johnson’s body was discovered Monday afternoon at his home. Deputies investigating Johnson’s death found a truck believed driven by Thompson in the driveway of Johnson’s home. Johnson’s silver Toyota Tundra, rifle, handgun and several checks from his checkbook were missing.

The property, which was owned by a Mobile man, is 200 acres of land used most often for hunting. Neighbors had spotted a silver truck entering and exiting the gated property and knew it was typically vacant this time of year.

“There was a cabin on each side of the lake. He’d parked his truck in front of one and was staying in the other,” said Thomas. “We had information he was in possession of high-powered rifles and night goggles and was high on Oxycodone. We were very cautious and very patient.”

The tactical team called for more manpower from the U.S. Marshals, Montgomery Sheriff’s Office and Department of Public Safety. U.S. Marshals had just arrived when Thompson was spotted leaving.

Because the land had several buildings and hundreds of acres, Weed said the tactical team chose to stake out all the exits. “We felt like it would be to our advantage being that we didn’t know where on the property he was,” Weed said. “We covered all of the drives leaving the property and hopefully be able to control the situation and make the choice where we would deal with him as opposed to him making that decision.”

Thompson was captured without incident Monday when he exited his vehicle while attempting to leave the property. The team had cut the power to the electric fence in order to make Thompson have to get out of the truck to check it. When he reached the fence, the team used a flash grenade to stun him before taking him into custody.

The weapon investigators suspect Thompson used in both murders was found in the truck.

“I’m proud of the way this incident turned out,” said Troy Police Chief Jimmy Ennis. “It could’ve been a very dangerous situation.”

Thomas said the plan was executed to perfection and commended all involved.

“It was a long night,” Thomas said. “But thank the Lord it was an early morning.”