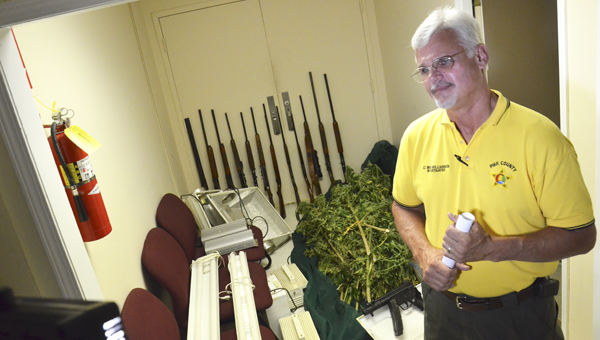 Lt. Bob Williamson lists the items seized from a Banks home Tuesday. The drug bust was one of the biggest he has worked in a residence. (Messenger Photo / Mona More)

A random flight resulted in one of the county’s biggest drug busts Tuesday.

Investigators with the Pike County Sheriff’s Office and agents from the Alabama ABC arrested two people after a pilot flying for the Alabama Department of Public Safety and Aviation Unit spotted several plants in the yard of a Banks home.

“We weren’t doing eradication. This was an accidental find,” said Lt. Bob Williamson.

Luther Clinton Green, 48, and Ramona Ann Vester, 47, were charged with trafficking marijuana once a warranted search yielded 195 plants ranging in height from a few inches to more than 7 feet tall.

Officials typically value a marijuana plant based on its potential sales. By that standard, Williamson said the plants were valued at $2,000 a piece, which in this case amounts to $426,000.

“As far as plants around and inside a residence, this is probably one of the largest ones I’ve ever been involved in investigating,” said Williamson.

In a storage building, officers found four large grow lights that weren’t in operation at the time. Thirteen shotguns and high-powered rifles were seized from the residence. Williamson plans to determine whether or not any of them are stolen property in the next few days.

“Neither one of them had an arrest record, as far as I could tell,” Williamson said.

Both were held on a $50,000 bond for the Class A felony. Vester made bond Wednesday.