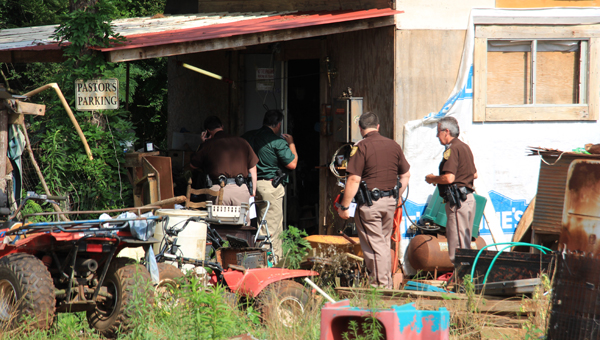 A Pike County man allegedly drew a gun on investigators then attempted to flee into the woods when a meth lab was discovered on his property during a missing person search Wednesday afternoon.

The incident took place around 2 p.m. on County Road 3310, when Pike County Sheriff’s Department investigators were assisting Barbour County deputies in the search for a missing 27-year-old woman.

A family member had listed the home of Bill Donaldson, 48, as a place the woman frequented, said Lt. Frank Wheeler of the Pike County Sheriff’s Department. “When a mother calls and says her child is missing, we’ve got to do all we can to find her,” he said.

Wheeler said he and Lt. Bob Williamson looked around the yard as they approached the home. Once there, Donaldson’s wife answered the door and told the investigators to look out back for Donaldson’s motorcycle.

That’s when he faced Donaldson, whom the deputy said was pointing a .9 mm handgun directly at his head.

“What he didn’t know was the shed had cameras and Donaldson had been watching him on a monitor inside,” said Sheriff Russell Thomas.

Williamson talked Donaldson into lowering the weapon, and the suspect was told to stand outside as the shed was searched. It was then investigators found the equipment for manufacturing methamphetamine and Donaldson fled into nearby woods.

Barbour County’s K-9 unit was nearby, searching for the missing woman.

Deputies called to the scene set up a perimeter and the dogs drew Donaldson out of hiding.

“Within 45 minutes, we had him in custody,” Thomas said.

In addition to the meth lab, officials said they recovered 14 guns during the search: two on Donaldson and 12 on the property. The missing woman was located around 3 p.m. in Barbour County. 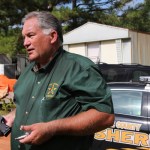 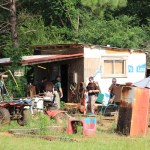 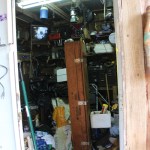 The view through the door of the structure where officals said the meth lab was housed. (Messenger Photo / April Garon) 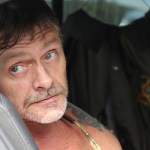