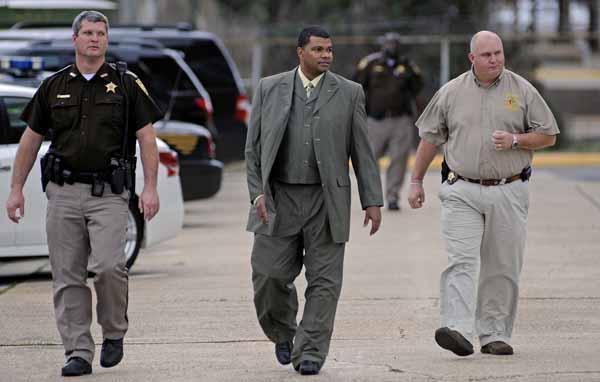 Andre Ellis, center, walks to the Pike County Jail from the Pike County Courthouse after the morning session of his trial in Troy, Ala., Monday, Jan. 14, 2013. Ellis is accused of raping two women on March 26, 2012. (Photo/Thomas Graning)

Pike County’s courts and law enforcement officials had a busy year in 2013. Some of the biggest cases included:

No resolution in Andre Ellis trial

The year began with the trial of Andre Ellis in January for the rape of two women at Hunter’s Mountain Mobile Home Park in March of 2012.

After three days of testimony in court and two hours of deliberation by the jury, Ellis was found guilty of both rapes and a burglary that took place during one of the assaults.

However, in May, Pike County Circuit Judge Jeff Kelley threw out Ellis’ convictions and accepted a motion by Ellis’ defense attorney to grant Ellis a new trial.

In Kelley’s eight-page order, he cited “inconsistency” in one of the victim’s testimony regarding the timeline of the events on the day of the alleged rape, which would lead to a “reasonable probability” that the results of the first trial would have been different if the State had not suppressed evidence. Kelley also found that much of the evidence that wasn’t disclosed by the State would have provided an opportunity to impeach the credibility of one witness and the investigation; that exculpatory and impeachable evidence that was suppressed was favorable to the defense; and that a victim was not truthful to medical professionals about what happened to her, a crime scene was cleaned and text messages were deleted prior to an investigation.

The Pike County District Attorney’s office filed a motion to set aside Kelley’s order granting a new trial, but the Alabama Court of Criminal Appeals denied this motion.

On August 1, a hearing was held to set a new trial date for Ellis. Ellis’ defense requested at least 120 days to prepare for the new trial.

As of now, Ellis is serving a 22-year sentence for a theft of property charge that is unrelated to the disputed trial.

Bean and McLeod were accomplices in a home invasion that turned violent in March of 2012. During the invasion, Thomas White broke in to a couple’s home and held them at gunpoint while robbing the house.

During the course of the robbery, an altercation broke out between White and the couple. After a long struggle involving a kitchen knife, all three parties were injured. White died from his wounds on March 9.

Bean and McLeod, knowing White’s intentions to commit a burglary, dropped him off at the couple’s residence and waited for him outside while he committed the robbery.

In May, Bean and McLeod were sentenced to 70 years in prison for their crimes.

On November 9, the entire Goshen community was saddened when Sammy Jackson, an 18-year-old senior at Goshen High School, was allegedly killed by his own father, Sammy D. Jackson.

According to Pike County Sheriff Russell Thomas, a domestic dispute from the night before spilled over to the next morning. “There had been an argument last night between the husband and wife that carried over to the morning,” Thomas said. “This morning, the father took a 12-guage shotgun and moved to the rear of the trailer where he fatally shot his 18-year-old son. He then shot his 16-year-old son who escaped through an open window, which probably saved his life.”

The 16-year-old son was injured, but ultimately survived the encounter. The Pike County’s Sheriff’s Department took Sammy D. Jackson in to custody and charged him with one count of murder and one count of attempted murder.

Following Sammy Jackson’s death, the Goshen community rallied around his family and remembered Jackson for the great young man he was. “He was a guy that was just the perfect teammate,” Goshen football head coach Bart Snyder said. “He was always doing what ever it took to get better, and was always encouraging the guys around him to do it the right way. Sammy Jackson was a fantastic young man to be around, and I know I am lucky to have coached him.”

Two weeks later, on November 23, Mike Mills, 51, of Troy, was murdered during a robbery at the Hill Mart store in Spring Hill.

Mills was shot, and the store’s cash register was taken during the robbery. Mills body was found by a customer, who then called police, at 8 p.m. that evening. Police suspect that the murder took place between 7:40 p.m. and 8 p.m. on the night of November 23.

As of now, nobody has been arrested for the crime. Sheriff Russell Thomas is still in need of the public’s help in solving the case. “We are asking for the public’s help,” Thomas said. “Somebody out there knows who did this. They need to do the right thing, the human thing, the decent thing and come forward.”

There is a $10,00 reward for anyone who can provide information leading to an arrest in the case. The case is still under investigation by the Pike County Sheriff’s department.

Troy saw its third murder in two months when Dimitri Miles, 21, of Lafayette Ga., shot and killed Marquise McLendon, 26, of Troy, during an attempted burglary.

Miles is alleged to have shot McLendon while McLendon was in the commission of a burglary.

Miles had been a walk-on player on Troy University’s football team, but he was not able to compete this past season for the Trojans because he was academically ineligible.

The gun Miles used in the murder had been stolen from Paulding County, Ga.

Miles was also charged with receiving stolen property (second degree) and possession of marijuana at the time of his arrest.

Troy University Athletic Director John Hartwell released a statement following Miles’ arrest. “First and foremost, anytime there is a loss of life it is tragic event and our thoughts and prayers go out to the victim and his family,” Hartwell said. “Dimitri Miles was a walk-on student-athlete on our football team who was academically ineligible to compete in competition this past season, but practiced as a member of the scout team “His association with our football team and the Troy Athletic Department has been terminated as a result of these charges which are associated with an incident that occurred off campus.”

Miles has been suspended from the university until the charges have been settled.