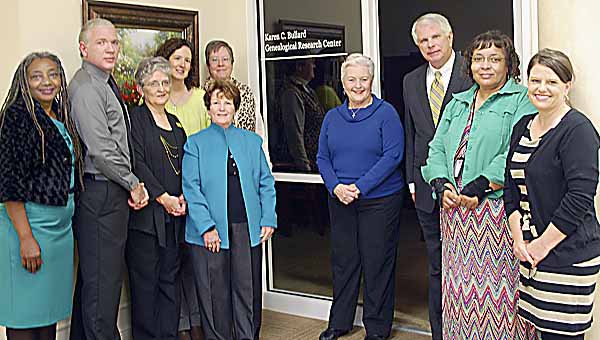 Library Director William White said Bullard is more than deserving of the honor.

White said that people come from all across the country in search of Bullard’s expertise.

“When I see cars in the parking lot from California, Montana and New York, I know why they are here.”

Bullard has worked full time at the Troy Public Library for 21 years and, prior to that was a part-time employee for four years.

Her handprint is all over the library, White said.

Bullard graciously and emotionally accepted the honor bestowed upon her.

“I am honored and I am humbled,” Bullard told the gathering of library board members, co-workers, City officials and family. “I am over the moon proud that my name will be on this room.”

Bullard said that she loves to turn people on to genealogy.

“It is an honor for me to help people who want to know where they came from,” she said. “It’s so much fun and I just love it.”

Bullard said that it was her mother who turned her on to genealogy.

“It all began with my mother and a baby book,” Bullard said. “When my daughter, Amanda, was born, there was a family tree in the back of her baby book. At that time, I didn’t know the full names of my grandparents. My mother turned me on to genealogy.”

Bullard said that her mother always had a strong sense of family.

“When I was growing up, she made sure that I went to family events –weddings, reunions – on both sides of the family,” she said.

As an adult, Bullard joined the Pike County Historical Society and the Daughters of the American Revolution. Her interest in, not only her family history but also that of others, “blossomed.”

“I got a kick out of finding genealogical information for others,” she said. “Virginia Key was the director of the Troy Public Library. I asked her if she could provide a spot for genealogists and researchers to do their work. She provided us with a table, four chairs and six books.”

Bullard said that a parade of mayors, city council members and library directors and board members “have brought us to this” – a state-of-the-art library that has dedicated an entire room to genealogical research.

Bullard has a map of the United States with pinpoints designating the hometowns of those who have done genealogical research at the TPL in the past year. Few states are not represented. There’s also a pin in Canada and one off to the side that represents Great Britain.

“Karen knows more about genealogy than anyone I know,” White said. “When people at the State Archives need to know something, they call Karen Bullard. That says it all about her.”

Johnny Witherington, Troy City Council president, said that he and Bullard go back a long way.

“We were in school together and Karen’s papers were always the ones we wanted to look at,” Witherington said, with a smile. “Karen was so intelligent. I knew back then that God had something special for her to do – and that is helping others go back and grasp the past.”

Witherington praised the wisdom of those who have kept the reins of the TPL’s genealogy department in “firmly held in this woman’s hands.”

“We hope that Karen will be here for a long time,” he said.