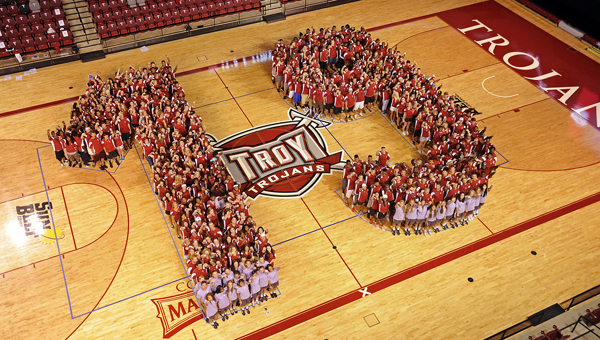 Coaches and administrators will often tell athletes that there are more important things in life than sports. While that is a valid point to teach players about life’s bigger picture, sometimes it’s not completely understood until an event alters the way a person views life.

Kailani Decock was preparing for her senior season as a Troy soccer player when in May she came down with what she thought at the time was a cold. After trying numerous remedies to no avail, she went to the doctor and in June was diagnosed with Hodgkin’s Lymphoma.

Troy head coach Chris Bentley was given the difficult task of informing the other players. And because it was summer, most of them were at home which for several was out of country. Bentley called them individually.

“We felt it was very important to speak to each player individually,” Bentley said. “We didn’t want to keep any secrets because we are a family. We didn’t want it to hit anyone like a ton of bricks so Kailani asked me if I could call the players for her.”

Though Bentley did call each player, it still hit some of them like a ton of bricks.

“A lot of us were away for the summer so coach had to tell everyone. None of us were prepared for that kind of news,” said sophomore Emily Sleeman. “[Decock] was shocked herself, obviously we were all just as shocked.”

As a result of the diagnosis, Bentley and the entire soccer team began to think of ways to help Decock, the result was much larger than their initial expectations.

“Our goal is to help her offset her incidental medical expenses but from that we want to start raising funds for Hodgkin’s Lymphoma research,” Bentley said. “For Kailani, the hard part was is that it started out as what seemed like just a cold. By chance, she went and had it checked out.”

From the eagerness to help #Project19 was born. The project’s vision as posted on Facebook is “To unite the Trojan Nation in an effort to support Kailani Decock in her bout against Hodgkin’s Lymphoma.”

A Twitter account and video have also been created as to help spread the word about the project, which based its name from Decock’s uniform number.

On Tuesday, every Troy student-athlete converged on the floor at Trojan Arena to form the number 19 in support of Decock, an Alberta, Canada native.

Troy soccer players and all Troy student-athletes will wear special purple bracelets in honor of Decock, as well as host several events on Troy’s campus and in the community.

“We are all here to win games, but winning is a byproduct of doing what’s right in all facets of life, not just on the field,” Bentley said. “Every time our student-athletes look at these bracelets, we want them to remind of how blessed they are to have this opportunity. We want these bracelets to be worn with pride because that’s what Kailani would want.”

Bracelets can be purchased at various Troy athletic events for a minimum $5 donation. All of the proceeds will go to Decock’s medical expenses. The first #Project19 event will take place after Troy’s first regular season home match against Louisiana Tech on Aug. 30.

Visit TroyMessenger.com to view the inspirational video as well as to connect to the several social media channels put in place to help supports follow Kailani’s progress.