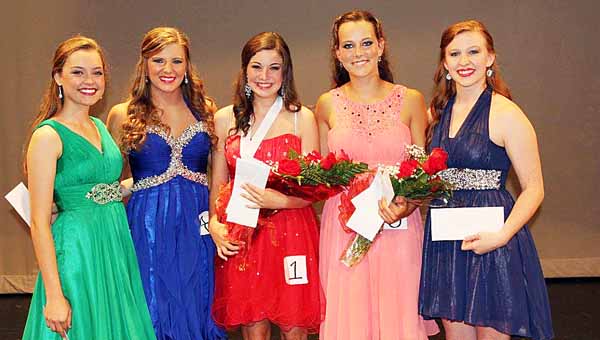 The Goshen High School senior was awarded the “distinguished” title Saturday night at the annual scholarship program at the Claudia Crosby Theatre.

Sanders said she is honored to hold the title and to have the opportunity to be a role model for younger girls.

“I have always looked up to those who represented Pike County as Distinguished Young Women,” Sanders said. “They were role models for me and I wanted to have that honor.”

Sanders said that, although she wanted to win the title, she had so much fun preparing for the competition that she would have been happy either way.

“Winning was important to me but I would have been happy for whoever won,” she said.

Sanders said much of the preparation for the competition was mental and, for her, that was the hardest part.

“The interview counted a big part of your score,” she said. “I really studied hard for that because there was no way to know what the judges would ask.”

There was an on-stage topic that the contestants were asked to discuss.

“We all had the same topic, ‘What celebrity would you choose to be your best friend for a day?’ I said Betty White. She has been in the entertainment business since 1950 and she dances and sings and loves to laugh.”

Sanders said she closed by saying, ‘From the ‘Golden Girls’ to ‘Falling Off Her Rocker,’ Betty White is the perfect best friend for me.’”

Sanders’ talent for the Distinguished Young Woman competition was a song and dance routine.

“The dance was the first solo dance I did when I was 10 years old,” she said. “I pulled that dance, ‘I Want to be a Rockett’ out of the past. But, at the State Distinguished Young Woman Program in January, I won’t sing. I’m a stronger dancer than I am a singer so I’ll concentrate on the dance.”

At Goshen High School, Sanders is captain of the cheer squad, an AIM mentor and a member of the FFA, the Key Club and the Future Business Leaders of America.

Her hobbies include swimming and playing the piano.

She plans to attend Troy University and earn a degree in theater and dance. She would like to teach and also work with special needs children.

Sanders’ parents are Steve and Donna Sanders of Goshen.

No matter the source, The Old Farmers Almanac, the Book of Common or some other “reliable” source on Dog Days,... read more