On June 11, 1963, the color barrier was broken at the University of Alabama, opening the way for thousands of black students to attend the previously all white university. 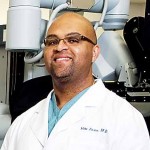 On Tuesday, a listing of some of the most prominent black graduates of the University of Alabama was on posted on a statewide newssite. On that list was 1986 Pike County High School graduate, Dr. Michael Bivins, the state’s first black urologist.

Bivins is a surgeon with Urology Centers of Alabama in Birmingham who utilizes robotics to perform surgery.

He has served on a previous governor’s state health coordination committee. He was recently nominated and accepted to the Alabama Leadership Course and has been a member of the Birmingham Leadership Course. Bivins, along with other Urology Centers physicians, conducts free annual prostate cancer screenings in underserved areas across the state, including Pike County.

He attended the University of Alabama from 1986-1991, a time that was 28 years removed from the stand in the schoolhouse door.

“At Alabama, I was able to be a part of a diverse student body,” Bivins said. “The University of Alabama laid the foundation for me to be able to do the thing I wanted to do most … take care of people.”

Bivins laughingly said his desire to become a doctor came from an episode of the television series “The Brady Bunch.”

“There was a doctor on the show and that was the first time that it hit me that I wanted to be a doctor,” he said. “I got the encyclopedia and started reading all I could about doctors and what they did. We had a first aid book at the house and I read it over and over.”

But it was not until Bivins was in sixth grade that he realized he really could be whatever he wanted to be and that was a doctor.

“Donald Watkins spoke at our sixth-grade graduation at Pike County Elementary School,” Bivins said. “He was a lawyer. That was the first time I had seen an African American lawyer and he had graduated from the University of Alabama. I knew then that, if Donald Watkins could do it, so could Michael Bivins.”

Bivins had the support of his family and the benefit of outstanding and dedicated teachers in the Brundidge schools.

“I will always be thankful for teachers like Avis Synco, Lois Robinson, Johnnie Mae Grant, Marilyn Phillips and Everett McGowan,” Bivins said. “They pointed me in the right direction and led me along the way.”

Although Bivins graduated from a high school in a small town in rural South Alabama, he was prepared for the future he had planned.

His hard-working mom, his family, his friends, his neighbors, his teachers, his community and his university pushed him along.

“Together they provided me with the building blocks necessary to make me who I am today, if I am anything,” he said.