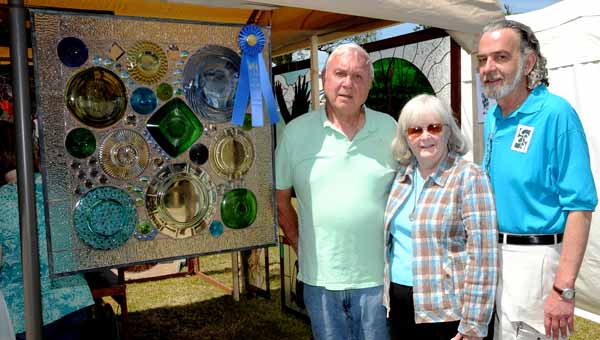 However, when the judges went to present the prestigious award to Adams on Friday, the “Best in Show” window panel was nowhere to be seen.

“The window panel had already been sold,” Adams said. “But, luckily, the lady who bought it had gone to move her car closer. While she was gone, I unpacked the panel so the judges could take a picture of it.”

But, after that, the blue ribbon stood alone during the rest of the two-day show.

Adams said he was honored to receive the “Best in Show” award.

“It’s always good and encouraging for your work to be recognized,” he said. “The panel that won was my most recent piece and it was the first time that it had been shown. To me, it was an interesting and beautiful window panel.”

“It included Rondell pieces which have a spun glass look,” Adams said. “The best way that I know to describe those pieces is that they look like the bottom of old Coca-Cola bottles. Real unusual.”

Adams pioneered the use of glassware in stained glass pieces in the early 1960s.

“Back then, I made my own plates to use in window panels,” he said. “Today, I use mainly glass pieces from the Depression era.”

Adams’ most prized window panel included plates that he had made nearly 50 years ago. It was lost in the December 2011 fire that destroyed Adams Glass Studio.

“Of all that was lost, it’s that piece that that meant the most,” he said. “It can never be duplicated.”

Adams said that he enjoys creating “sentimental” pieces for clients.

“People will bring their grandmother’s glassware and want it incorporated in a panel or a door,” he said. “Those are special pieces because of the significance of the personal items. I enjoy doing those.”

Adams said that he often has a personal attachment to a piece and it’s hard to let it go.

But half the fun of creating pieces like the Piney Woods Arts Festival “Best in Show” is “scouting” for the glassware for the pieces.

“A lot of that old glassware came in sacks of flour or even feed sacks,” he said. “It’s getting harder to find.”

Adams will be a featured artist at TroyFest on the square in downtown Troy April 27 and 28.

“We’ll have a good show,” he said. “People were buying at Piney Woods and that’s an indication that things may be turning around. That would be a good thing for all of us.”