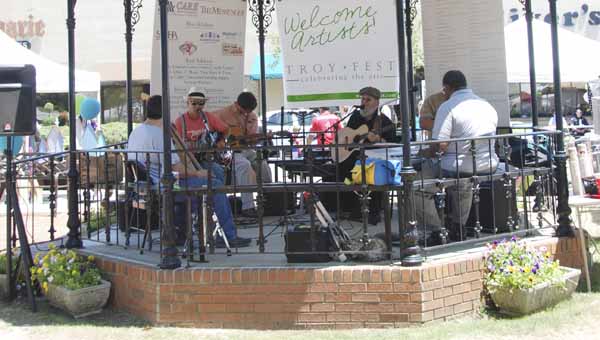 TroyFest has long enjoyed music from several bands from across South Alabama, however this year there is a new songwriters competition. Applications are available at www.troyfest.com/songwritersfestival.

TroyFest 2013 will have all of the “things” that have made it one of the most popular and prestigious arts festivals in South Alabama. And, this year’s festival will feature a new event, a Songwriters Competition, that will add to its prominence in juried arts and crafts shows.

Morgan Drinkard, TroyFest committee member, said the focus of TroyFest is the visual arts and the committee wanted to expand its focus to include a performing arts event.

“We realized that there is not a songwriters’ competition in Central Alabama and thought that would be a great addition to TroyFest,” she said. “The TroyFest Songwriters Competition will include the competition on Saturday, April 27 and a concert that will feature a well-know performing artist on Saturday night.”

The TroyFest Songwriters Competition and Concert will offer entrants the opportunity to receive written comments on their work from industry professionals, to network and collaborate with other songwriters, to raising their professional profiles and potentially open doors to other performances at local levels, said Bart Culpepper, chair of the TroyFest entertainment committee.

“This addition to TroyFest activities will continue to highlight artists,” Culpepper said.

“The Songwriters Competition entries will be accepted in three categories: Contemporary/ pop, country/bluegrass and inspiration.”

Participants may submit up to three songs in each category with a $25 entry fee per song. Entries must be postmarked by April 12. Applications are available at www.troyfest.com/songwritersfestival.

“The first place winner in each category will perform their winning song as the opening act for the headlining performance of the Songwriters Festival Concert, which is also an addition to the TroyFest activities,” Culpepper said. “The winner will also take home a $500 cash prize and receive free recording time in the world-renowned Muscle Shoals studio of FAME Publishing, where legendary artists including Alabama, Aretha Franklin, Etta James, Andy Williams and Jerry Lee Lewis recorded.”

Participants who are chosen to perform will begin competing at 9 a.m. at The Studio in downtown Troy on Saturday, April 27. Qualified judges will score on lyrics, originality and music composition. The production value and quality of performance will not be considered.

“The TroyFest Committee was able to form the Songwriters Festival from a grant awarded by the Alabama State Council on the Arts,” said Rob Drinkard, TroyFest chair. “With the initial grant funds, we were able to gather support from local businesses and people in the music industry.”

TroyFest is sponsored annually by the City of Troy, the Troy Arts Council and the Pike County Chamber of Commerce and is held annually the last weekend in April.

For more information about the Songwriters Competition or to enter Songwriters’ Festival competition, visit http://troyfest.com/songwritersfestival/ for an application. Applications are also available at troyfest@troycable.net.

The 71st Pike County Steer and Heifer Show is set for Saturday night at Cattleman Park. The public is invited... read more