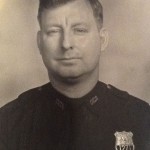 Chris was born in Kings Mountain, NC on March 2, 1925.  After graduating from High School, Chris enlisted in the Navy.  While at a USO Canteen in NYC, Chris met the “love of his life” Marion and married on April 6, 1945. Chris and Marion spent the next 67 years together. Upon discharge, Chris began his career with the NYC Police Department; working initially as a patrolman and ultimately was promoted to Detective on the Bomb Squad. Disarming bombs was routine to him. Repairmen, neighbors, etc., couldn’t help but notice all the commendations on the walls and pictures of Chris disarming bombs.  This would lead to long visits listening to the stories of his days combating the Black Panthers and Weathermen in the 70’s and 80’s. Besides his stories he was known for his unique expressions, such as “GO SCRATCH”.  It was just routine for him and he was extremely humble in thinking that it was anything special.

Chris is survived by his three children, Vi Kremkau of Athens, GA; Chris Hayes of Rochester, NY and Eric Hayes of Troy, AL, five grandchildren and four great grandchildren. Chris is preceded in death by his parents, brother, sister and recently his beloved wife, Marion Hayes.

A celebration of life memorial for Chris and Marion will take place at a future date.

Memorial donations may be made to Hospice Advantage or Athens Humane Society.

Lord & Stephens East is in charge of arrangements. www.lordandstephens.com