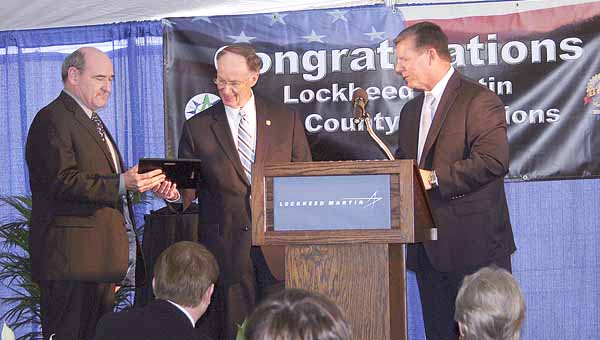 Lockheed Martin’s Pike County Operations facility celebrated its selection as one of IndustryWeek’s “Best Plants in North America” and the Alabama Performance Excellence award for 2012 with a ceremony and luncheon Wednesday.

The ceremony also honored “the people made it happen,” said Dave Anderson, site manager, in recognizing the awarding of two top honors in the state and in the industry.

“The most important thing is the people. The people made it possible,” Bentley said. “You can teach skills but you cannot teach attitude and work ethic.”

Bentley was the keynote speaker at the celebration ceremony at the facility. He heralded Lockheed Martin’s Pike County Operations facility as “one of the best plants in America.”

He told the Lockheed Martin teammates what they do every day makes it easier for him to recruit new business and industry to Alabama.

The governor said, when he took office in 2010, he was dedicated to creating new jobs, even in difficult economic times and with no ready money to attract industry.

“We worked together as a team, with local economic developers and elected officials,” he said. “We worked to create a climate where we could create and retain industry.”

Aerospace related industries were targeted and today, the governor said, there are 330 aerospace industries in Alabama.

“Of all the things that I can sell as I travel across the world, the most important thing is people,” Bentley said. “People make the difference.”

Bentley told the Lockheed employees that people like them, who go to work every day, work hard and take pride in the products that they produce, make it easy to do his job.

“You work hard and do the best job you can. You make me so proud and you provide me with the ammunition to recruit and build new industries and keep existing jobs.”

The governor thanked the people of Lockheed Martin’s Pike County Operations facility for protecting the nation.

“Alabama has more veterans, per capita, than any other state,” he said. “Ten percent of those who live in Alabama are veterans. And, you are part of protecting our nation and

O’Neal said teamwork is the key to the performance of Lockheed’s Pike County facility.

“You are a unique team,” he told the employees. “You find ways out of difficulties. When you get focused, amazing things happen.”

O’Neal said it is difficult to win best plant, performance and quality awards and congratulated the employees for their commitment to teamwork and to their ability to always “rise to the occasion.”

Hayes also congratulated the employees on winning the IndustryWeek’s Best Plants in North America Award, Alabama’s Performance Excellence Award and the Malcolm Baldrige National Quality Award, which will be presented later in the year.

“Only a couple of organizations have done that,” he said. “You are elite in accomplishing that.”

Hayes highlighted the facility’s highest safety culture, “facts which you create;” its high level of quality, “unsurpassed;” and customer satisfaction, which is “met and exceeded.”

“Excellence all over,” he said.

The Alabama Performance Excellence award program, modeled after the Malcolm Baldrige National Quality Award, recognizes and honors organizations that use effective productivity and quality improvement strategies, techniques or practices that can be shared with other organizations to help contribute to the overall economic well being of the state of Alabama.