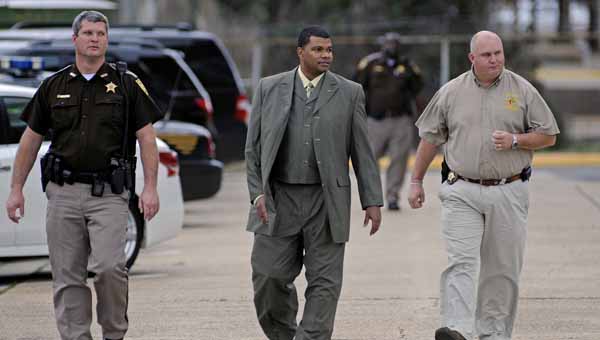 After a closed hearing with two jurors on Wednesday, Andre Ellis’ remains convicted of raping two women last year. A sentencing hearing has been scheduled for March 27.

Circuit Judge Jeff Kelley held a closed hearing with two jurors on Wednesday afternoon after they reportedly contacted the court with reservations concerning verdicts returned as part of Ellis’ rape trial, according to court documents.

A motion filed by the District Attorney’s Office on Feb. 18 asked the judge to set aside his order due to two sworn affidavits by the jurors that they still believe Ellis is guilty, contrary to information reported to court personnel. Kelley denied that motion and Wednesday’s hearing took place as scheduled.

“He swore them in,” said District Attorney Tom Anderson. “They said they stood by their verdicts and he affirmed their verdicts.”

On Jan. 14, a jury, including the two individuals involved in Wednesday’s hearing, found Ellis guilty of two counts of rape in the first degree and one count of burglary in the second degree stemming from two rapes reported in March 2012. A sentencing hearing has been scheduled for Ellis on March 27.

Students learn with help of wildcards

Wildcards don’t always come in a deck. Sometimes, they wiggle and squirm and ask a dozen questions without taking a... read more