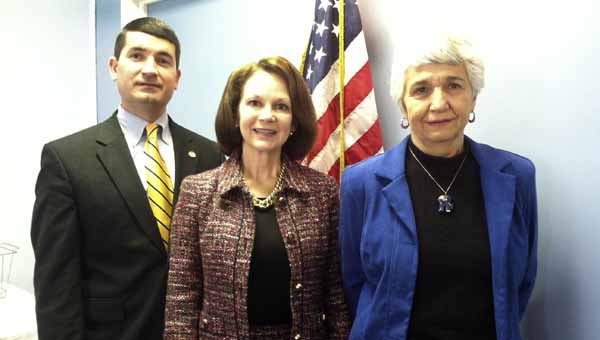 Tom Anderson, District Attorney, Stephanie Bell, Vice President of the State Board of Education, and Rachel Lee, member of the Pike County Republican Women. Bell spoke on her fears of the Common Core Standards Initiative.

“Common Core,” as it is known in education circles, is a U.S. education initiative that seeks to bring diverse state curricula into alignment with each other by following the principles of standards-based education reform. The initiative is sponsored by the National Governors Association and the Council of Chief State School Officers.

Bell, a member of the Republican Party since 1981, said that Common Core needs to be repealed because the implementation will put even further strains on the schools in Alabama that are already dealing with No Child Left Behind.

The state of Alabama formally adopted the standard of the Common Core Initiative in November of 2010, but it will not be fully implemented until the 2013-14 school year. Bills have been introduced in to the Alabama Senate and House of Representatives to repeal the standards before they take full effect.

Bell said that the state of Alabama does not need Common Core because numerous advances have been made under the “old standard.” Alabama has made strides in reading and math, and ranked first in advanced placement progress. She also said that state of Alabama was one of nine states to show considerable gain in reading.

“The progress we have made in this state was made using the standards that we had in place,” said Bell. “Some people call them the old standards but they are actually still in the six-year cycle in where we revise our education standards. They are old compared to common core, but not old in general. I asked the question of why we need to change when I voted against Common Core implementation, because it does not make since.”

Bell said that with the standards of Common Core, teachers are not able to do the job they were hired to do, as they are forced to teach to a test and not to learn.

“I would love to see teachers regain control of their classroom,” said Bell. “Teachers know what they need to do, and they are the basis of the education system. Teachers go in to the profession because they love to help children and they want to see them learn. They don’t have the type of flexibility that they had before. It is like in healthcare where doctors are telling people not to go in to medicine because of what is happening with Obamacare. It is the same thing with Common Core as it is being implemented.”

Tammy Powell, retired Pike County Extension Coordinator, has been named to the Alabama 4-H Wall of Fame Powell will be... read more