Voice of Troy Police prepares to retire after 30 years. 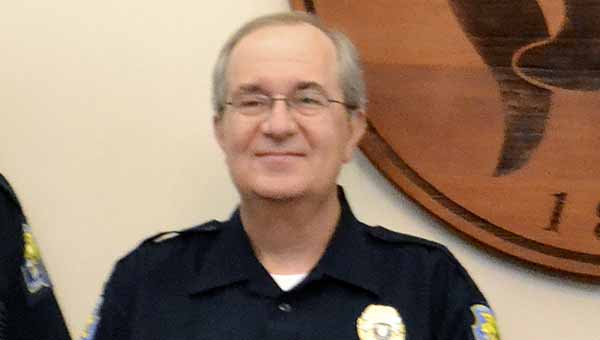 Troy Police Sgt. Benny Scarbrough is retiring after 30 years of service. He joined the department in 1982 and has had a huge impact on the youth of Troy and Pike County.

Troy Police Sgt. Benny Scarbrough’s office looks bare. Pictures are down from the walls, documents have been moved out. Only the nameplate on his desk remains.

“We talk about retirement, and I know what retirement is, but I don’t feel like a person who is retiring,” Scarbrough said. “I am graduating.”

After more than 30 years with the TPD, Scarbrough will be leaving for new adventures.

“I am opening another door,” Scarbrough said. “I just don’t know where that door is going to lead, yet.”

Before joining the police force, Scarbrough worked for Southeast Alabama Youth Services where he was a juvenile specialist. It was at that job he made connections with law enforcement officers in the area and an opportunity presented itself in Troy.

Scarbrough helped to start a juvenile division at TPD when he joined the department on Sept. 1, 1982. He also worked with crime prevention programs.

Scarbrough was promoted to a sergeant in the detective division 1986, still working with juveniles. He began working public information officer duties under Police Chief Grady Reeves. And in 1997, Scarbrough was given the title of Administrative Assistant to Police Chief Anthony Everage.

“He has done an outstanding job,” Reeves said. “I worked with him for many, many years. He did an excellent job for me.”

Reeves said Scarbrough was a good problem solver and his communication skills made him a natural at the PIO job.

“He always had the ability to talk to kids. He had that ability where kids trusted him and would confide in him. It translated to working with media and other public.”

“He and I worked together probably 14 and a half years in the chief’s office and I always found him to be a person of high character. His honesty and integrity are above reproach. When you work with someone that long, you know how a person really is. It was truly my privilege to have the opportunity to work with him.”

“We had a lot of fun and enjoyed working together,” Calista Everage shared. “I know he has earned a good retirement and I hope he enjoys it very much.”

Chiefs current and past recalled Scarbrough was passionate about his job and the community.

“You’ll never find a more dedicated, loyal employee,” said Police Chief Jimmy Ennis. “We can put someone in his position, but we can never replace Sgt. Scarbrough. He’s meant so much to this department over the years and will be fondly remembered.”

Scarbrough had a reputation of working well with community youths, and Mayor Jason A. Reeves can attest to that.

“Mr. Benny, as I call him, has been part of my life since I was about 10 or 12 years old,” Jason Reeves said. “I could always count on him to talk to me about things, whether I was a kid, a college student at Troy University, a councilman, or mayor. At every stage of my life he has watched me grow up and given me support and advice.”

But above Scarbrough’s duties in a uniform, his friends and co-workers remember him as a good, loyal, God-fearing man.

“To me, he is mostly a friend, and one I will miss very dearly,” Jason Reeves said. “And the city is going to miss him. I am proud that he is my friend and always has been.”

A retirement reception will be held Thursday at 2 p.m. at the Municipal Courtroom behind the Troy Police Department. Everyone is invited.