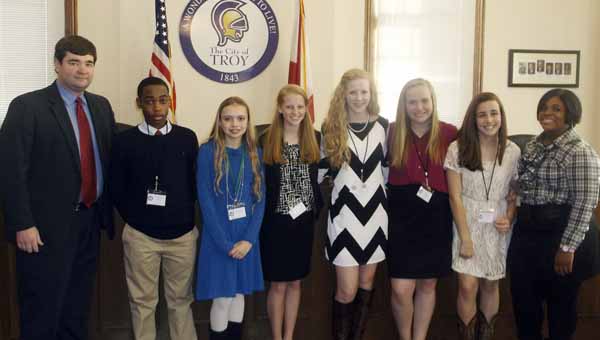 Students take over city hall for a day

The middle school students were all winners of the Mayor for a Day contest. The students spent the day touring the city and meeting with local leaders before the council session.

After running through a mock resolution, the adult city council members joined in with the students to discuss their own agenda.

The council voted to approve a special events license to allow roadside zoo Jungle Safari to operate in Troy this week; to award a bid for a new police car to Ken Cox Ford in the amount of $25,348 with about $12,000 of insurance money going toward the purchase; to allow Mayor Jason Reeves to acquire a bond anticipation loan valued at up to $5 million to pay for ATRIP matches; to update the Building and Fire Code from a 2006 version to a 2009 version; and to reappoint Dr. Doug Patterson to the Troy Hospital Health Care Authority.

Reeves shared with the council and those present that Troy has received a historical designation for Downtown Troy.

Before the meeting was adjourned, the council recognized the Troy girls 12 and under basketball team who recently won the district tournament and will be competing soon at the state level.

Downtown revitalization is focus of community progress A community’s identity is defined by its downtown. Its history is etched on... read more