City of Troy appoints new Mayor for a Day

Next Tuesday, Troy middle school students will be taking over the city as part of the annual “Mayor for a Day” contest. 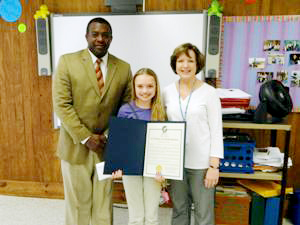 Out of 79 entries, Danielle Daniel, from Charles Henderson Middle School, was selected as the 2013 City of Troy Mayor for a Day.

Students were asked to write essays about innovative ways they would change the community for the better if they were mayor.

“The Mayor for a Day council meeting was always my favorite meeting of the year,” said Troy Mayor Jason A. Reeves. “I have been involved with the program since its inception, and am always fascinated with the feedback and ideas generated from the essays.”

The winners will have the chance to tour various city departments, participate in a live radio broadcast, have lunch with Reeves, and craft their own mock resolution that would bring about a positive change for the City of Troy.

“I would like to thank the students, the parents, the teachers, the judges, and my staff for the outstanding work they did in preparation for this very special day,” Reeves said. “I look forward to spending time with the students and interacting with them as we learn from each other about municipal government.”