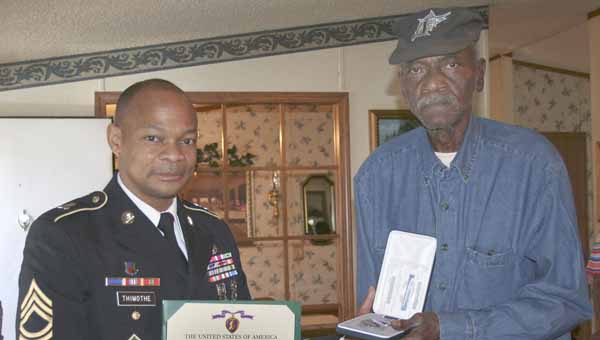 Army Corp. Herbert King was posthumously awarded the United States of America Purple Heart Thursday. SFC Jean Thimothe 1st -13th Aviation Battalion, Fort Rucker, presented the medal to King’s brother, Charlie King of Troy. The Purple Heart recipient was killed in Korea in Nov. 30, 1950. He was listed as Missing in Action for 60 years before his body was recovered. He was given a full military burial on March 2, 2010 in Troy.

Charlie King graciously and gratefully accepted the United States of America Purple Heart that was awarded posthumously to his brother Corp. Herbert King on Thursday.

“I will cherish it always,” King told those who had gathered for the informal ceremony at the home of his daughter, Rochelle King, in Troy. “This is a very special day for me and all my family. We cherish the memory of my brother who was killed in Korea so long ago.

King remembers vividly the day that his mother received the telegram saying that her son, Corp. Herbert King, was missing in action in Korea. It was November 1950. 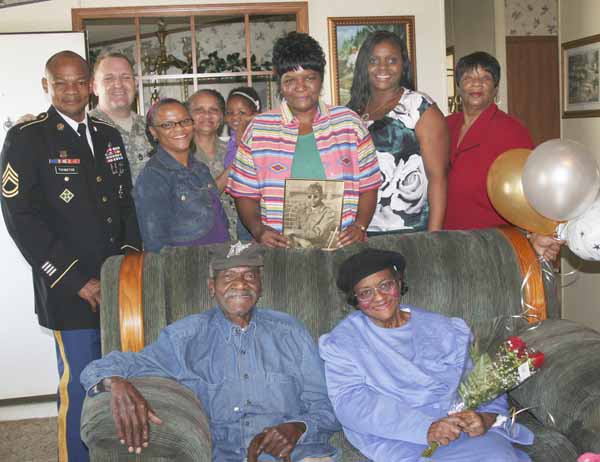 The family of Army Corp. Herbert King gathered at the home of Rochelle King in Troy Thursday as he was posthumously awarded the Purple Heart for wounds receive in action during the Korean War. King’s brother, Charlie, accepted the award, which was presented on his wedding anniversary. Charlie and Wilma King have been married 55 years. King said Thursday was a day that he will cherish always.

“Herbert had been in the Army two years when he went missing,” his brother said. “He joined when he was 18 years old because he wanted to be a soldier.

“I was only 14 years old when the telegram came. That was a terrible day for our family but my mother always hoped and believed that Herbert would come home.

“For all those years, we didn’t know if he was dead or alive. We had to wonder and wait and pray for him to come home.

On March 2, 2010, after Missing in Action for 60 years, he was finally laid to rest with military honors in Troy, his hometown.

“We never had given up hope and were so excited and blessed to know that Herbert’s body had been found and that he would come home,” King said. “Our mother didn’t get to know though.”

Rochelle King said that her uncle’s body was located in a battleground foxhole in Korea.

“There were three soldiers in that foxhole. They were lying on top of each other,” she said. “My uncle was in the middle so the Army was able to recover almost all of his remains and his dog tag and his hat and boots. But they still needed DNA evidence to prove that it was him.”

For the DNA evidence, the Army looked to the next of kin, his brother, Charlie King.

“The Army sent a kit and we sent the swab back and it was 99.9 percent proof that the body was Uncle Herbert,” King said. “It was a sad day but it was a happy day when he finally came home. And, this is a happy day, too.”

And, it was with great pride that Corp. Herbert King’s family accepted the Purple Heart in his honor on Thursday.

The award was presented to Charlie King by SFC Jean Thimothe and SFC David Cochran of the 1st-13th Aviation Battalion at Fort Rucker.

And, it was more than a coincidence that the Purple Heart was awarded to King’s family on Feb. 21, said Lytricia King.

Charlie King placed the Purple Heart next to the boxed flag and medals that were given to the family at Herbert King’s funeral two years ago.

Those items are now his legacy.

But perhaps, the greatest legacy lies in the fact that all three of his younger brothers, Charlie, Eddie and Samuel, volunteered to serve their country to honor their brother who was Missing In Action.

That was the least they could do, King said.

Community members, students and local celebrities crafted bowls for this year’s luncheon. The soup’s on and the bowls are ready... read more