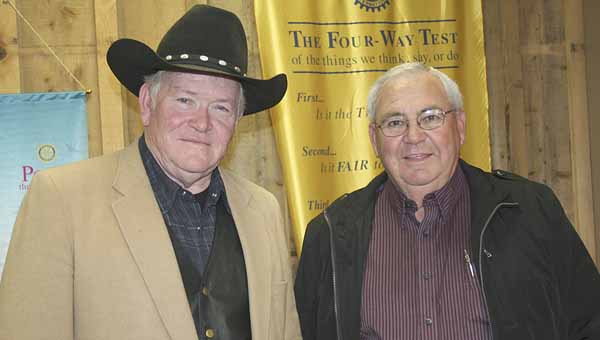 Ed Whatley, a retired promoter with the Alabama Cattlemen’s Association, was the guest speaker at the Brundidge Rotary Club Wednesday. His is pictured with program host, Johnny Garrett, right.

Ed Whatley wears a black cowboy hat and has the swagger of “the Man in Black.”

He plays a mean guitar and sings country music but, all of that aside, beef is his main thing.

Whatley brought his “Eat more beef” philosophy to the Brundidge Rotary Club Wednesday and the Rotarians “bit’ into it.

Whatley is a 40-year veteran of the beef and cattle industry. He has experience in the retail meat business, restaurant management and most recently as a field man and public relations specialist for the Alabama Cattlemen’s Association.

After his retirement in 2010, Whatley focused his efforts on the promotion of his all-natural meat and vegetable seasoning, “Cattlemen’s Steak Shake,” which is also the spice for a tasty dip mix.

Whatley could have talked to the Rotarians about his music, his adventures and experiences as a beef promoter or a dozen other interests but he chose instead to talk about agriculture and the role in plays in the lives of all Americans.

“We live in a rather rural area so we know something about the importance of agriculture in our daily lives,” Whatley said. “But Most of the people in New York City and Chicago — people in all the urban areas — know little about the role agriculture plays in their lives and don’t appreciate what it takes to put food on the table. We probably are going to have to go hungry for them to know.”

Whatley praised the Pike County Cattlemen’s Association for the role it plays in putting the highest quality beef on America’s table and for its contributions to the Pike County community.

“Cattleman Park is a facility that is second to none,” he said. “The indoor facility seats nearly 1,100 and the covered arena seats 3,000. The facility is available to the community for a variety of events and at a very reasonable rate.”

Whatley expressed appreciation to the Cattlemen for the rodeo events that their association brings to the county.

“The Pike County Cattlemen are a very active and involved group and their focus is the youth of Pike County,” he said. “Their organization is dedicated to growth – to moving to the next level — and to making dollars to educate the youth and the general public about beef and agriculture.”

Community members, students and local celebrities crafted bowls for this year’s luncheon. The soup’s on and the bowls are ready... read more