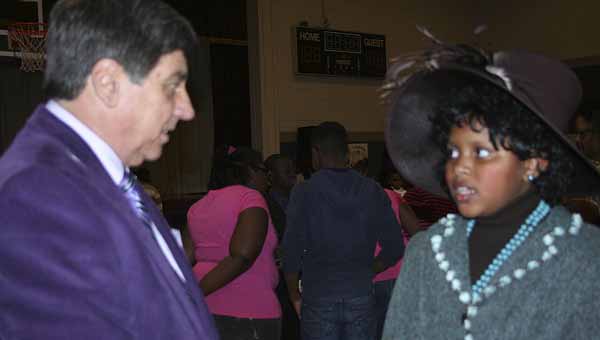 More than 40 fourth grade students at Pike County Elementary School had to wait to speak until their buttons were pushed.

The students participated in the Black History Wax Museum Tuesday afternoon and brought to life many of the African Americans who have made, and are making, outstanding contributions to society.

“The students enjoyed participating and they learned a lot about the contributions that African Americans have made to our country,” Everette said. “The parents and members of the community were very supportive and appreciated the students’ efforts.”

Everette 46 students participated in the second Black History Wax Museum at the school gymnasium Tuesday afternoon and again Tuesday night when families and friends were invited to attend.

“The Black History Wax Museum is a learning experience for the fourth graders and all the other students who attend,” she said.

The fourth grade students are assigned a prominent African American, past or present, for their presentation at the wax museum.

The students research their assigned personalities, make an informational display board and then portray that person at the wax museum.

“They have to dress the part of their prominent African American and give a short presentation about that person and their accomplishment and contributions when their button is pushed,” Everette said.

The students were assigned to stations at the Black History Wax Museum and had to remain perfectly still and silent until a visitor to the museum pushed their button.

On that cue, the students presented a short biographical sketch of their personality.