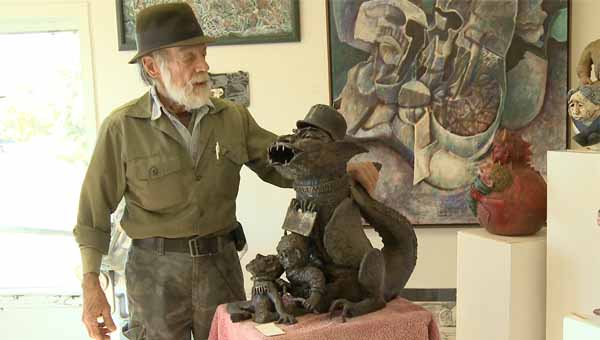 Godwin is a multi-talented artist. Although he is well known and respected as a canvas and clay artist, Godwin’s most “seen” art is his metal sculptures.

Godwin has life-size sculptures at Disney World and at Daytona Beach Florida and Dayton, Ohio, where his Wright Brothers “first flight” sculptures can be seen.

But it was the gigantic rooster that Godwin “sculpted” from chrome automobile bumpers that caught the eye and the interest of University of Alabama professor Nick Corrao.

The professor said that he knew almost immediately that the artist who produced the roadside rooster sculpture was fodder for the filming of “Alabama Art Seen.”

“Alabama Art Seen” is the University of Alabama student-produced program that exhibits the many different kinds of artists living and working in Alabama.

Corrao, who is executive producer of the program, said “Alabama Art Seen” was created by university faculty and is produced and hosted by media students. Three episodes will air this month.

“The program highlights artists and musicians of Alabama while providing students behind the camera with hands-on professional experience in the television industry,” Corrao said.

“We produce one or two episodes a semester. The students begin the semester by researching and pitching segment ideas. These ideas are then voted on by the class and three are selected for each episode. Small production teams are formed within the class, and these teams are responsible for scheduling, filming and editing their segments with their artist subjects.

“We hope for a positive contribution to local art by way of exhibition and audience interest. By getting the word out about local artists, the goal is to raise awareness in the audience while bringing notoriety to artists around the state.”

Jordan Hendricks, a student producer, said Godwin was selected for “Alabama Art Seen” based on his being one of the first to be a part of the state’s artist-in-residence program.

Zachary White said the visit with Godwin was quite an interesting experience.

“I had already seen some of Mr. Godwin’s art over the course of my life,” White said. “For example, the rooster in front of his shop, the bull near Troy, and the dog in Northport but had never given any thought to who made them and how.

“Come to find out he’s practically a jack-of-all-trades when it comes to his mastery of the arts. Not only is he skilled at his scrap-iron sculptures, he’s also quite skilled at paintings and pottery — the pottery which we call lawyer-pots because of their judicially-based themes.”

White said Godwin gave the visiting university students an extensive overview of his life spanning from playing basketball in high school, his entry in to the arts, background of some of his artwork and ventures into the judicial system to how he cares for his elderly mother and his extreme disdain of corn-syrup.

Corrao said the visit with Godwin was an opportunity for the students to meet a practicing artist and learn more about his art and about what it’s like to be an artist in Alabama.

“The aim of ‘Alabama Art Seen,’ is to grow the excitement and investment in the arts here in Alabama,” Corrao said. “I hope that the audience is exposed to different artists and art forms that they didn’t know existed here in Alabama, and more importantly that the show inspires them to seek out more of these artists and art forms. Getting involved either creatively or as a supportive member of the arts community is a tremendously rewarding experience.”