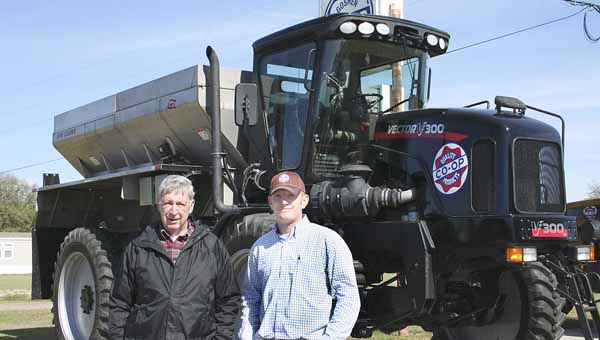 Colin Morris, Goshen and Ariton Farmers Cooperatives general manager, right, and Jack Norton, Goshen Farmers Co-op board member, were on hand Monday for the delivery of a Vector 300 spreading machine that will be available to area farmers. The machine spreads fertilizer at a variable rate, which means greater cost savings to farmers.

Farming in today’s world is a very expensive and risky business. So, farmers always have to find ways to put a few dollars in their pockets.

Row crop farmers can now look to the Goshen and Ariton Farmers Cooperatives for a way.

The co-ops now have a Vector spreading machine available for service.

Colin Morris, co-op general manager, said the Vector spreading machine is the first of its kind in South Alabama and, perhaps the only one of its kind, for now.

“A machine like this, brand new, would cost in the range of $300,000,” Morris said. “This one is three years old. We got it on a three-year lease. And, it will be worth the cost to our row-crop farmers and those with hay fields and pastures.”

The Goshen and Ariton co-ops have an older spreading machine but the tires on the newer machine are narrower making it more manageable in the field thus causing less damage to the crops.

The spreading machine spreads fertilizer at a variable rate and that will mean a huge dollar savings to row crop farmers.

“Fertilizer is a tremendous expense to a farmer,” Morris said. “With this spreading machine, the fertilizer is put where it is needed — more on the weak land and less on the more fertile land.”

Morris said the co-op will take soil samples of the land and that information will be entered into the spreader’s computer.

“The spreader has a GPS that will use that information to plot on a grid exactly which areas need heavier fertilizing and which need les. So less fertilizer is used than with a spreader that spreads the same amount of fertilizer across a field,” Morris said. “This spreading machine offers a big cost savings in lime and fertilizer to row crop farmers.”

The spreading machine will be used by farmers who plant cotton and corn.

“This spreading machine can be used for reapplications until the crops get up about two feet,” Morris said. “So, it will put some money back in the farmer’s pocket at the end of the year.”

Steve Stroud, Goshen farmer and chair of the Goshen Farmers Co-op board of directors, said that he plans to use the Vector spreading machine on his hay fields.

The spreading machine also has a dual product bed and spreads two different fertilizers in one trip.

“You can turn one bed off and the other on and that, too, will be a big benefit to the farmers,” Morris said. “We have two sets of tires for the spreader, row crop tires and flotation tires. The floatation tires won’t cut ruts and they won’t compact the dirt. They’re good in pastures and hay fields.”

Farmers can schedule the Vector spreading machine for their fields by calling the farmers cooperatives in Goshen and Ariton. The cost for the use of the spreading machine is figured into the cost of the fertilizer.

Mike Gilley is the driver out of both co-ops.

For more information, contact the Goshen Farmers at 484-3441 or Co-op or board members, Stroud, Jack Norton, Curtiss Shaver, Ned Sanders and Bill Sanders.