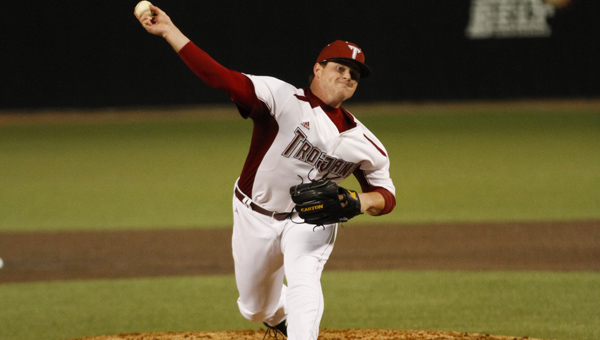 Troy’s Will Starling (22) throws a pitch in the Trojans win over Florida A&M on Friday. (Photo/Joshua Thurston, Troy University)

Will Starling has pitched at Riddle-Pace Field before. He had not done so at the Division I level, however. In front of his family, his former high school team and coach, Starling pitched three shutout innings for Troy University on Friday as the Trojans opened the 2013 season with a 9-2 victory over Florida A&M.

The Pike Liberal Arts graduate started off strong for Troy in the first striking out two of the first four batter batters he faced. The second inning saw Starling, a junior transfer from Southern Union, hit a bump. After walking Pete Jackson, Starling threw a pair of wild pitches that allowed Jackson to move up to third base with no one out. Startling would strike out the next batter then Garrett Johnson dribbled a 1-0 pitch back to the mound where Starling caught Jackson between bases and tossed to third baseman Logan Pierce for the out. Another strike out would allow Starling and the Trojans to escape the inning without any damage.

In the third, Starling (1-0) worked a perfect frame racking up his fifth strikeout of the game. In picking up the victory, Starling tossed three innings allowing one hit, one walk and struck out five.

“I’ve wanted to play at Troy since I was little,” Starling said. “It was a big deal to come out and pitch tonight.”

“In junior college there are a lot of good players, but there isn’t the quality at the bottom of the lineup like there is in Division I. I got my nerves up a little, but got lucky with the guy breaking (from third). I settled in though and worked out of it.”

Troy (1-0) struck first in the home half of the first inning. Leadoff hitter Tyler Vaughn singled to open the game and quickly stole second base. Danny Collins was hit by a pitch two batters later and a passed ball allowed the runners to advance to second and third. Newcomer Trae Santos singled with two outs to score Vaughn and Collins and give the Trojans a 2-0 lead.

Troy’s offense would be silenced until the fifth inning. Florida A&M starter David Duncan got into trouble with one out. Jakob Nixon tripled the Pierce singled him home. Collins was again hit by a pitch forcing FAMU to make a pitching change. Things didn’t get much better as Freshman Bryan Neal walked two straight before hitting Jake Harrell. With two outs, Ali Knowles delivered the deathblow, a two-out triple to give Troy the 8-0 advantage.

Knowles would lead the Trojans, who had seven hits, finishing the game 2-for-4 with three RBIs. Pierce, the Sun Belt Conference’s Preseason Player of the Year was 1-for-5 with an RBI.

“We were trying to get all the nerves and jitters out and get a win which we did,” Pierce said.

Pierce, a Charles Henderson graduate who made the move to third base this season for Troy, made an error on a short hop to his left in the eighth inning. Pierce, who hasn’t played third since high school, said it will take some time to get completely comfortable on the opposite side of the diamond.

“I felt good overall. I got out of position on that one ball, but I felt OK,” Pierce said. “I haven’t been over there in a while so I had my nervous moments.”

The Trojans would use five different pitchers in the game, part of head coach Bobby Pierce’s plan to utilize as many arms as possible.

“There were a lot of reasons for (Starling) to be amped up tonight. I though he held on pretty good, got through it and pitched well for his work that he got in tonight.,” Pierce said. “There were a lot of bright signs, but overall we didn’t swing the bat as well as we wanted to.”

The Trojans will return to the diamond against Florida A&M today as part of a doubleheader beginning at 1 p.m.

Troy will open its 2013 season against Florida A&M tonight

Troy will open its 2013 season against Florida A&M tonight at Riddle-Pace Field at 6 p.m. The Trojans will be... read more