Former state trooper Curly Long was honored with a reception at the Pike County Courthouse for his  service to law enforcement. 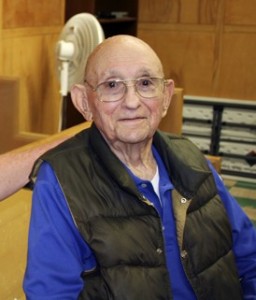 A large gathering of family and friends joined law enforcement officers in recognizing Long at age 95 as the oldest living state trooper in Alabama.

Boothe shared a “Curly Long” story and about the legendary “highway patrolman.”

“Curly is probably the only trooper to have shot is own car,” said Boothe, who was an officer with the Troy Police Department during a time of Long’s service. “Curly was chasing a car and held out his pistol to shoot. The wind blew the pistol down and he shot the front of his car. But, he got the road runner off the road.”

Long expressed appreciation to those who came to honor him and his service to Pike County and the surrounding areas.

“I had a job to do and I did it,” he said adding that the “job” sometimes posted positive results.

Long told the story of a man who approached him at Julia’s Restaurant? The man said when he was young he was “as wild as an Indian” and was “cuttin’ up” on the highway.

Long pulled him over and the “then” young man tried to grab his gun. Long knocked him to the ground and evidently some sense into him.

“He said that probably saved his life because he could have been killed on the highway,” Long said.

Randy Hale, a neighbor and longtime friend of Long said, not only was Long a great highway patrolman, he was an excellent gardener.

“He could grow anything better than anybody else,” Hale said. “Whatever he had, he would share.”

Hale said he would see Long out working his garden with so much care that was hard to imagine him involved in the biggest crime event in Troy’s history. The Dr. Gault shootout at a Needmore cemetery.

“But he was a colorful character,” Hale said. “One of my favorite stories is about the time he was a motorcycle trooper and was down around Mobile. Curly said he was chasing a car at about 75 miles per hour. The car wouldn’t stop but suddenly there was a loud, pop, and his motor went out. About that time, the car he was chasing started to slow down and it pulled off the road. Curly coasted in behind the car, gave the man a citation and then had to call the highway patrol office in Montgomery to come get his motorcycle.”

One by one, those who came to honor Long had a story to tell and many of them had to admit to getting the highway patrolman’s autograph and a good stiff reprimand.

Long could “lay down the law” but he had big, soft heart his daughter Glenda Pinckard said.

“I remember getting up on morning to find a strange man on our sofa,” Pinckard said. “He and his wife and baby had been involved in an accident. The baby was in the hospital and its mother was with it. Daddy had let the man sleep at our house and had given him a clean shirt because his had blood on it.”

Pinckard said every time there was a new trooper in the area, Long brought him home for lunch.

“He had quite a reputation but he had a heart of gold,” she said.

Dennis Long said his dad was a tough trooper but he was first a family man.

“He made sure you understood there were consequences to what you did,” Long said. “When he made a stop, what happened depended on the person attitude. Dad probably let more people go than he ticketed.”

Long said his dad made many sacrifices for his family and would work extra to give them things they needed.

“We all sat down to the table to eat and he was always there to listen,” Long said. “He was never too busy for his four kids. And, there were always a lot of hugs around our house. He is a special dad and we are so blessed to have him.”