Out of the ashes: Adams Glass re-opens

Johann Wolfgang von Goethe said, “Our passion are the true phoenixes; when the old one is burnt out, a new one rises from its ashes.”

A week to the day before Adams Glass Studio was destroyed by fire a year ago, the doors will again open and, out of the ashes “a new one rises.”

Charles Adams, studio owner, hunched over the worktable in the downstairs of the newly constructed “Adams Nut Shop and Adams Glass Studio.” The solder was flowing as Adams crafted a stained glass “Sisters Holding Hands” angel that will be featured at the “Adams” Open House Friday through Sunday. 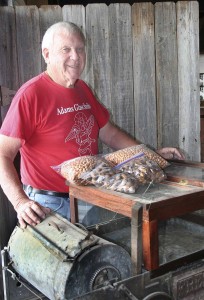 “When I sat and watched the studio go up in flames last Nov. 30, I thought it was all over,” Adams said. “What my daddy, Sam, started in 1953 in that little roadside stand under that old oak tree between Brundidge and Clio was coming to an end.”

As the fire raged, Adams said that, yes, he would build back, but later that night, as the rubble continued to smolder, a hopeless feeling consumed him. Building back would be too much, too hard. It was over.

“But my wife, Mary, and my children were determined,” Adams said. “This was a huge part of all their lives and of the grandchildren’s. Adams Nut Shop and later Adams Glass Studio were who we are. They made me realize that we didn’t have a choice. We had to build back – build our lives back.”

Adams was working downstairs at the “new” Adams’ place Tuesday because he had been banished from the work that was going on “upstairs.”

“They told me to get down here and leave them alone,” Adams said, laughing. “I want things done my way and I get grumpy if they don’t go my way.”

The Adams family and friends were working against the clock to get everything in place before the door opens for Open House at 5 p.m. Friday.

“Open House the weekend after Thanksgiving has been an Adams tradition and that’s when we want to open the new studio and nut shop,” Adams said. “We knew it would be a push but we pushed.”

The new “studio” will actually be two shops under one roof.

“The south side will be the Adams Nut Shop will be much like Adams Nut Shop when my dad, Sam Adams, was around the run it and entertain folks,” Adams said. “The walls are from my Uncle Elmer’s bedroom in the old house over at Texasville and the counter was built from wood from my daddy’s smokehouse.

“Adams Nut Shop will be filled with old stuff and unique stuff. We’ll have peanuts, pecans, a popcorn machine, an antique peanut roaster and an old Coke box. We’ll have jams and jellies, honey and syrup. Just like Sam did. We’ll have walking sticks, birdhouses and artwork by locals. It will be an interesting place.”

Adams has always been known for its candy kitchen and the new candy kitchen will be a replica of Sam’s original nut shop complete with a shingled roof from the original Adams Nut Shop building. The candy kitchen has a glass front so visitors can watch the candy being made.

The north side of the building will be Adams Glass Studio and will be more upscale. However, the walls have been painted Uncle Elmer Green to coincide with the Nut Shop décor.

“The Glass Studio will feature all of our glass art — windows, panels, flat glass, sun catchers, clocks, lamps and angels and David (Adams) is creating some whimsical birds that are fun and unique,” Adams said. “Some of the larger items, we won’t have at Open House.

We’re working long and hard but it’s going to take a lot of time to get back. But we will have Nativity scenes, Christmas ornaments and three new angels to offer this Christmas season.”

Adams said he and his family have been so blessed to have had the support and encouragement of so many wonderful people.

“We lost a big part of our lives but we have a chance now to begin again and we are so thankful for it,” he said.

Sam Adams built his roadside business from the ground up.

His son, Charles and his family, have built their business back “out of the ashes” of the flames of that dark November day.

The word “roots” usually applies to the part of a plant that attaches itself to the ground from which it... read more