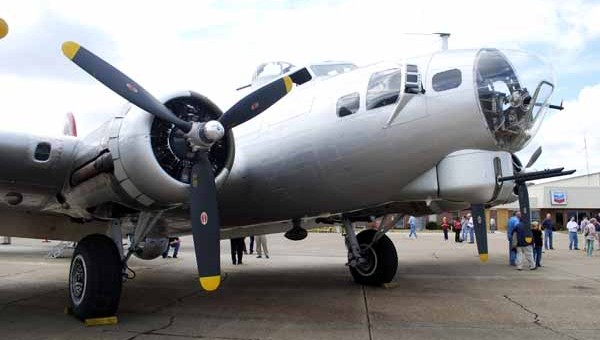 Arthur Osepchook stood in front of the ball turret attached to a B-17 parked at the Dothan Regional Airport Thursday morning. He touched the plane and smiled.

“I am so proud to meet this old bird,” Osepchook said.

The “Flying Fortress” named Aluminum Overcast was a little older than the last one Osepchook rode in, but the World War II vet had aged, as well.

Osepchook was a Staff Sergeant and Ball Turret Gunner assigned to the 384th BG 546th BS. The last time he rode in a B-17, it was March 9, 1944. His crew’s mission: to destroy the Heinkel Aircraft Plant in Oranienburg, Germany.

But the Silver Dollar, the plane Osepchook was in that day, never landed. The B-17 was lost after “bombs away” when bombs from an enemy plane knocked the tail off in front of the stabilizer. The aircraft dove straight down into a spin with all four engines going.

Osepchook survived, but was taken as a prisoner of war for 14 months.

“If the tail didn’t come off, I wouldn’t have made it,” Osepchook shared, noting that he and the plane’s waist gunner were the only two to survive the experience. Eight other crewmembers perished that day in March.

“It was the best airplane they had,” Osepchook said of the B-17. “It would take a lot of punishment, a lot of flack. It saved a lot of crews.”

Sixty-eight years later, the Experimental Aircraft Association’s restored B-17 bomber Aluminum Overcast is making it possible for Osepchook and other WWII veterans to relive their time in a Flying Fortress.

And that possibility is also being extended to Alabamians as part of EAA’s “Salute to Veterans” tour. The plane’s Dothan stop is just one of the locations on the plane’s yearlong tour across the country.

At each stop visitors can tour the Aluminum Overcast and flight “missions” are available which allow people to experience the aircraft from the sky.

If it wasn’t for people riding this would be in a museum somewhere behind velvet ropes and people wouldn’t even be able to touch it,” said Terry Tucker, the aircraft’s flight engineer Thursday said.

B-17s were designed by Boeing and only 2,000 were made. One-third were lost at war with a crew of 10 people on board. Tucker said Aluminum Overcast costs about $3,500 per hour to fly and the plane uses 200 gallons of fuel per hour.

EAA is a non-profit organization dedication to the preservation of aircraft and public education.