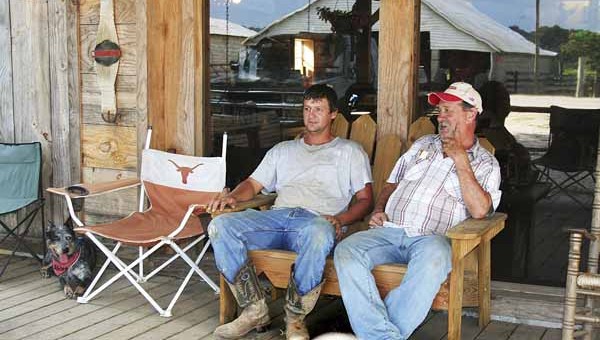 If you didn’t know better, the old place would be foreboding, with a diamondback rattlesnake skin tacked on the wall and an ax handle by the door. The old wooden porch rocker was creaking for no obvious reason, and there was hurried activity around a “waspers” nest.

Danny Thompson would be along shortly to give a tour around the good ol’ boys place on County Road 3316.

Thompson’s pickup truck whipped in and he got out eating a big bag of chips and gave a cheerful, welcoming “howdy.”

“This used to be a mule barn,” Thompson said.   My granddaddy Ira “Ace” Thompson would pull his cotton wagons in the shed here and Daddy, Ira Wilson Thompson, used this old place for his truck shop. When my daddy moved out, it stood here until it near about fell down.”  Thompson has a fondness for and appreciation of old things, “the older the better,” so he didn’t want to see the old barn/shop fall in on itself.

“It just about had, but I called a friend, Charles Corley, who does mighty good carpenter work, and asked him to fix up the place where we could go to get out of the weather – a place where good old boys could go.”

Corley advised Thompson to tear the place down before it fell down and start over. But Thompson wanted to hold on to the old place, so it was to be.

“Most everything in this old place came from the farm,” Thompson said. “The lumber is off this place and the bricks are from the old sugar cane mill that was out in the pasture. All these old farm implements, too. This one right here is an old stump drill where folks would drill a hole in a stump so they could burn it. Don’t see many of them around.”

Some of the advertising signs were in the shop – “Fresh Yard Eggs 10 Cents” Some Thompson bought because they were a good fit, “Beauty is in the eye of the beerholder.”

The stools at the bar—“the oyster bar” were purchased to match the décor – and advertise John Deere tractors and such. The bar awning is made of old tin roofing off the old barn/shop and has hundreds of cow tags from all across the country as border decorations.

“I hauled cows all across the country and that’s where I picked up the cow tags,” Thompson said.

Thompson modestly acknowledges that he killed every one of the rattlers that are mounted on boards all around the place.

“All, killed right here on the farm,” he said. “Big ones, they are.”  Off to the side of the good ol’ boys’ gathering place is a living area for Thompson when he takes a notion to stay the night.

“The bedroom and the bathroom were built from two cypress trees that I cut down right here on the farm,” he said. “That was several years ago, and you can still smell the fresh wood. This is a good place to spend time with friends or just by yourself.”

Most of the time, Thompson spends time with friends at the “Thompson” place.

“We gather up here on Sunday afternoons and go for horseback rides,” he said. “We have some cookouts, especially when there’s a big football game, but the biggest crowd is on the first Saturday after the New Year. We cook a hog and we’ll have 150 to 200 folks.”  But the time that Thompson enjoys most is when a few buddies stop by and they sit and chew the fat.

“I was out here one day and a young woman pulled up and asked if this was where BamaJam was,” Thompson said, laughing. “I said, ‘No, ma’am, this is not BamaJam. You’re on the wrong road.”

It’s a pretty good bet that if the young woman had stayed, she would not have been disappointed.