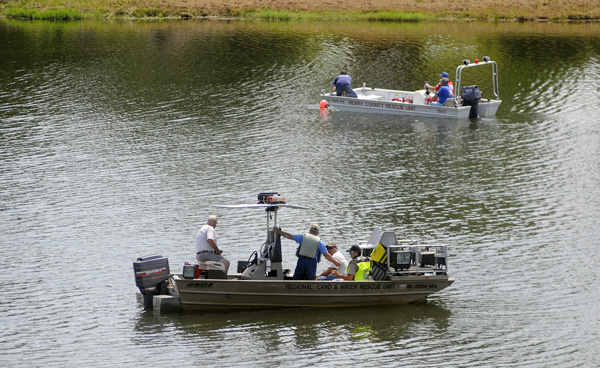 Rescuers search for a reported missing person in relation to a boating incident on Swindall Road in Troy, Ala., Sunday, May 27, 2012. (Messenger Staff Photo/Thomas Graning)

According to police, the body of a man missing since Saturday has been found.

Searchers found the body of 56-year-old David Junior Williams around 3:30 a.m. Monday in Swindall’s Pond on Swindall Road. Searchers have been searching the pond since Williams was reported missing around 7:30 p.m. Saturday.

Troy Police released a mid-afternoon statement saying that they are still investigating the case.

According to the release, TPD, the Houston Count Regional Dive Team, the Dale County Sheriff’s Department helicopter, Troy Fire Department and other EMS are still investigating the scene.

No further information was provided in the release.

Rescuers are still searching for the missing person.

Members of the Regional Land and Water Rescue, from Dothan, Ala., the Henry County Rescue Unit, the Dale County Sheriff’s Office helicopter, and the Troy Police Department are working at the scene.

More information will be posted as it becomes available.

At approximately 7:30 p.m. Saturday a person was reported missing on Swindall Road in Troy possibly relating to a boating incident.