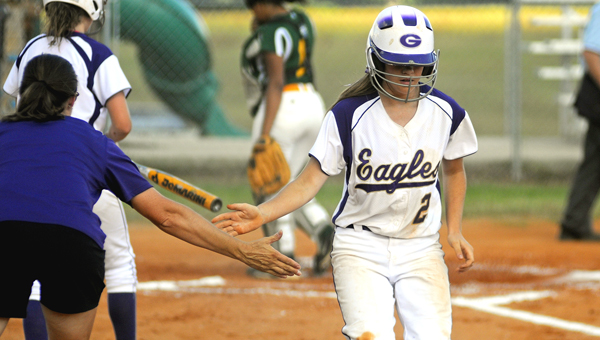 Teammates and coaches congratulate Goshen High School's Fran Warrick (2) after scoring during a game in Goshen, Ala., Friday, May 4, 2012. (Messenger Staff Photo/Thomas Graning)

Early in the 2012 softball season, it looked as though Alli Warrick and Racheal Senn would endure a long, gloomy senior year.

That all changed midway through the season. The Eagles, with several underclassman playing key roles, began to find some common ground with each other and reeled off a 14 consecutive victories.

“We started to hang out more and spend more time around each other,” catcher Racheal Senn said. “We just needed to understand each other a little better.”

The Eagles finished second in the area tournament to Central-Hayneville then finished runner-up to Leroy in the South Central Regional tournament in Troy last week.

“We played good early in the season but it didn’t seem like we had that factor to push through at the end of games to win,” pitcher Alli Warrick said. “The girls turned it around through hard work and dedication. We have a lot of younger girls that have come together and learned from the older girls.”

Goshen has benefited from the experience of its senior battery this season.

As Goshen’s ace pitcher, Warrick has faced stiff competition this year, especially early in the season. The Eagles several higher classification opponents including Dallas County (4A), Robertsdale (6A), and Northview (6A).

“We played a lot of higher-ranked and bigger teams to get us ready for this part of the season,” Warrick said. “At one point, we played five games over a weekend and we ended up winning all of them. That’s when everything clicked.”

The turnaround was a welcomed change for the pair of seniors.

“It was nice,” Senn said with a smile. “I enjoyed it very much.”

“It sometimes looked farther away than it does now but I think we knew we would get back to state if we kept working hard,” said Warrick.

And as for confidence heading into the team’s match with Hatton, Class 2A defending champs?

Goshen takes on defending state champs in opening round

With the 2012 softball season coming to a close, only one Pike County team remains in play, and they’re about to face their biggest challenge of the season in this weekend’s AHSAA state playoffs.

The Goshen Eagles softball team will travel to Montgomery on Friday to face the defending champions Hatton High School in the first round of the playoffs.

“We expect a tough game,” Eagles coach Amy Warrick said. “We’ve got nothing left to lose and we’re going to give it everything we’ve got and I think we’ll surprise them. We’re not going to be cocky we’re just going to leave everything on the field, play a good game and have no regrets.”

The Eagles began the 2012 season with Alli Warrick and Racheal Senn at pitcher and catcher, respectively, with two eighth graders and a seventh grader making up the outfield.

The youth of the Eagle lineup has been an uncertainty for the team all season, though a 14-game winning streak toward the end of regular season play helped show that the team’s youth is more than capable of holding its own.

“The streak gave us a lot of confidence,” coach Warrick said. “It let this young team know we could compete and then our loss to Central in the area tournament helped bring us down to earth and helped us not get too cocky. We’re thankful to be here and just want to play our best game; I feel we’re just as balanced as the competition.”

In preparation for their match with Hatton the Eagles have been working to tighten up their game and streamline communication between their players, with special focus in the last few practices on strengthening their bats.

“We’ve worked a lot on cutoff and bunt defense this week,” coach Warrick said. “We had a big hitting day and worked on our basic mechanics. We need to get loosened up and make sure everyone knows where they’re going.”

The Eagles will play their first round match against Hatton at 10:30 a.m. in the double elimination tournament on Friday morning.

All games will be played at Lagoon Park in Montgomery.

Check www.troymessenger.com for updates over the weekend.