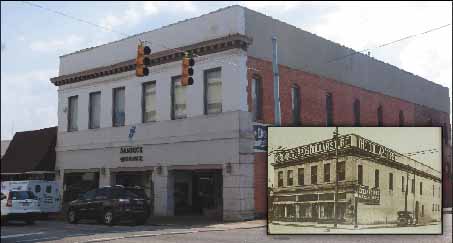 The downtown square of Troy is steeped in history, but along with the buildings that make up the area the local businesses have a storied history themselves.

This year on May 1, Sanbuck Insurance celebrated its 30th anniversary on the square, making them the oldest continuously owned insurance agency in Pike County.

Sanbuck, founded in the late 1800s and originally called Farmers & Merchants Insurance, is currently co-owned by Denny Sanford who, along with his father in 1982, purchased the agency and opened up a location on the downtown square. John Buck is also an owner.

“My father was actually in coaching and education,” Sanford said. “After about the fourth kid he decided that he needed to do something to better support his family.”

The building they acquired was formerly the site of Rosenberg’s Department Store, with the duo moving into the location in August 1982.

Sanbuck was only the second business to operate in the building, which was built in the 1800s.

Along with Byrd Drugs and Douglas Brother’s Jewelry, Sanbuck is one of the longest standing businesses on the square today, a fact that Sanford enjoys.

“We have really enjoyed being here and we hope to be here for a long time,” he said. “I love it downtown, I wouldn’t be anywhere else.”

Though his father retired after the first 10 years of the agency’s operation in Troy, Denny Sanford continues to be heavily involved in his business.

Currently, Sanford is in the process of renovating the building, with the goal of preserving its historical value to the city of Troy.

“We’ve been remodeling the building and taking some of the hardwood floors down to their original state,” he said. “We plan on staying right here. There’s not another agency in Troy that’s been owned as long as I have owned this agency. It’s been around for a while, I’m just the caretaker.”

Sanbuck Insurance is located on the square in Troy, with other offices in Enterprise and Andalusia.

“It’s been a long time,” Sanford said with a laugh. “I’m starting to feel old. Thirty years has gone by so fast. It’s hard to believe.”