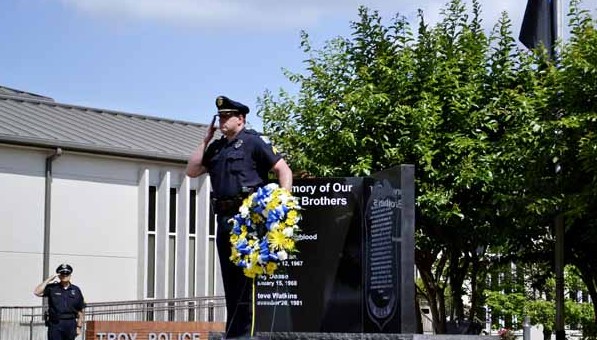 “We hope to never add another name,” said Troy Mayor Jimmy Lunsford. “These are all people we know, who we all respect, who gave their lives for us.”

Five officers from the Troy Police Department have been killed or died in the line of duty. Their names and end of watch dates are placed on memorial stones outside the police department and in Bicentennial Park – Officer Will G. Jackson, June 1905; Officer Hayden Youngblood, May 1962; Officer Cecil Sullivan, November 1967; Officer Billy Dease, January 1968; and Officer Steve Watkins, November 1981.

A wreath was placed at each memorial site as Taps was played under sunny skies. With heads bowed, a dispatcher with TPD, Daniel Johnson lead those in attendance in a prayer for the fallen, and the officers of the Pike County Sheriff’s Office, TPD and the Troy University Police Department.

“Father, watch over them. Protect them, steady them and guide them home safely when their day is through,” Johnson said.

There are almost 150 names on the 2011 Roll Call of Honor list in memorial of officers killed in the line of duty last year. Three of those names represent Alabama officers.

To watch a video or see photos from the Wednesday memorial service in Troy, visit www.troymessenger.com.