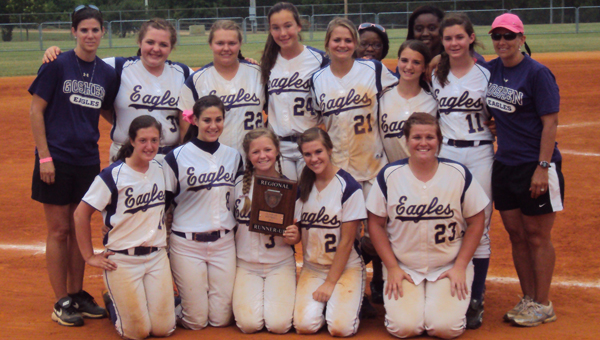 Goshen's softball team is pictured after earning a berth in the AHSAA state tournament. (Submitted Photo)

After a second place finish in the South Central Regional Tournament over the weekend, the Goshen High School softball team is preparing for a trip to the state playoffs for second year in a row.

In 2011, the Eagles won the first round of the playoffs before being eliminated at the hands of Mobile Christian two games later, and this year will open the playoffs with a match against defending champion Hatton High School.

The Eagle outfield will be one of the biggest uncertainties going into the playoffs, as all three of the backfield starters represent the youngest and most inexperienced part of the team.

Though the youth in the backfield may raise a few eyebrows, the Eagle coaches aren’t worried about the trio’s ability to hold their own at the state level.

“They’ve already exceeded my expectations for them this season,” Eagles assistant coach Amy Warrick said. “As of right now we really have nothing to lose. Those three will be as big as they need to be for the playoffs. They’ve been good for us all season and I think they’ll find a way to get it done. We’re all just excited to be in the playoffs again, it’s what we’ve wanted all season.”

Senior pitcher Alli Warrick, who brings much needed experience and leadership to the field, will headline the Goshen defense.

Warrick pitched four innings to open the region tournament against Thorsby, striking out five batters and allowing only one run on three hits.

“Expecting her to hopefully have her best game yet,” Amy Warrick said. “She’s been to the playoffs before and has put a lot of work in so we expect her to play well. She’s able to stay calm and be a leader to the team and since this tournament will be her last time on the mound for us and I think she wants to go out a winner.”

With a week left until the playoffs begin the eagles will be using the time they have to work on beefing up the defense.

Bunting and bunt defense will be areas of particular attention for the Eagle players, not to mention fine-tuning the outfield in preparation for their match with Hatton.

“We met some good competition in the regional tournament and saw some good teams.” Warrick said. “We played Leroy who is a strong team with solid bunting so it gave us a chance to work on our bunt defense in a game situation, which is definitely something we’re working on right now.”

The Eagles will play their first game of the playoffs on Friday at 10:30 a.m. with a second game to follow later in the day.

All games will be played in Montgomery at Lagoon Park.