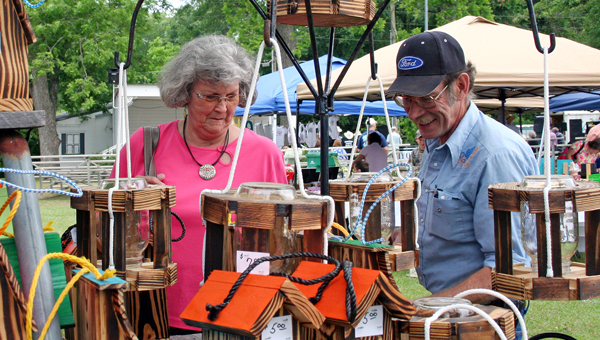 Forty arts and crafts vendors turned out for the second annual SpringFest in Brundidge this weekend. Highlights of the day also included a motorcycle run and a parade, complete with a cadre of canine entries. (Photo/Jaine Treadwell)

For a while, it appeared that Mother Nature would put a damper on the 2nd Annual SpringFest in Brundidge on Saturday.

However, the threat was no more than a few raindrops here and there.

“The weather did cooperate and the SpringFest, our second, was a great success,” said Dixie Shehane, event chair for the sponsoring Brundidge Business Association.

SpringFest got off to a roaring start with 18 motorcycles entered in the first SpringFest Motorcycle Run.

“The run started and ended at The Wagon Wheel in Brundidge with stops in Ozark, Troy and the Country Mall,” Shehane said. “Prizes were awarded at each stop and Jeff Parish was the grand prize winner and received $100.

“Everyone seemed to have a great time. We were pleased with the number of entries for the first-time event. That was all the encouragement we needed and we’re already planning on how to make the motorcycle run bigger and better next year.”

“I talked with several artists and craftsmen and they all said they had a good day and some of our merchants benefited from sidewalk sales,” Shehane said. “We had a good line-up of entertainment and a fun kids’ corner so it was a good day in Brundidge.”

Shehane said the purpose of SpringFest is to provide an event specifically for the spring season.

“We have quite a few entertainment events in Brundidge during the year except for the spring,” Shehane said. “A spring arts and crafts event offers a different variety of booths such as flowers, shrubs, yard ornaments and other items for the outdoors. We like to have something going on in Brundidge year around and are excited about the opportunities that this new event brings. SpringFest will be an annual event.”

The BBA now will turn its attention to the Independence Day Parade set for the last Saturday in June.