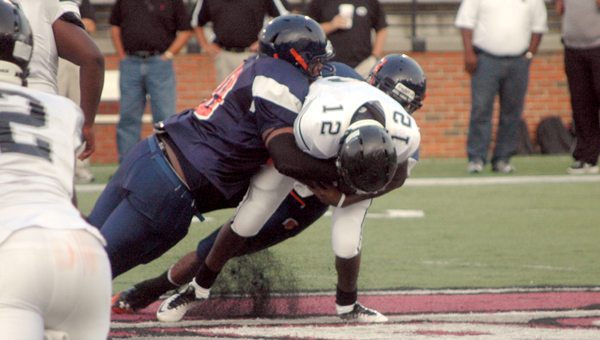 The Trojans fell, 6-0, to Smiths Station in a game that was only scored through three quarters.

“Our number one goal this spring was to find out who really wanted to be here,” Dean said. “For three quarters we went toe-to-toe with a 6A school.”

The difference in the game was Smiths Station 25-yard touchdown pass and catch midway through the second quarter.

The play, which resulted from busted coverage in the Charles Henderson secondary, capped a nine-play, 80-yard drive by the Panthers, who only passes the ball six times all night.

“We shot ourselves on defense,” Dean said. “We got outflanked and when we didn’t get outflanked, our linebackers didn’t fill.”

Charles Henderson missed an opportunity to take the lead on the possession prior to Smiths Station’s score.

The Trojans drove the ball 70 yards before missing a 25-yard field goal. Rising sophomore quarterback Austin Ingram was a perfect 4-for-4 on the drive for 34 yards.

Ingram would finished the game 7-for-13.

“We have three guys that we’re looking at with the quarterback position but with Ingram, he’s got the ability to throw the football vertically a little better,” said Dean. “The other two guys add something different. All three are great character kids but with Ingram he has a little more of a vertical throwing game.”

The other two guys to which Dean referred are John Johnson and Josh Crawford.

Johnson started the game under center and was 5-for-6 passing for 19 yards.

Charles Henderson, making the switch from Hugh Fountain’s I-formation offense to Dean’s spread, ran 46 plays in the scrimmage with half being passes.

Though, the Trojans didn’t score, Dean was happy to get the team on the field for the first time.

“One of the good things about tonight is that all of the mistakes we made are completely correctable,” he said. “We’ll get back at it and keep working as hard as we can.”

Dean took over for Hugh Fountain, who was with Charles Henderson for 16 years and compiled a 106-67 record.

Dean came to the Trojans after a season at Valley High School where he posted a 6-6 record. Prior to Valley, Dean coached at McGill-Toolen in Mobile and Daleville High School. He also spent a decade as an assistant at four different schools.

Charles Henderson finished 6-6 last season and lost to St. Paul’s in the second round of the AHSAA state playoffs.