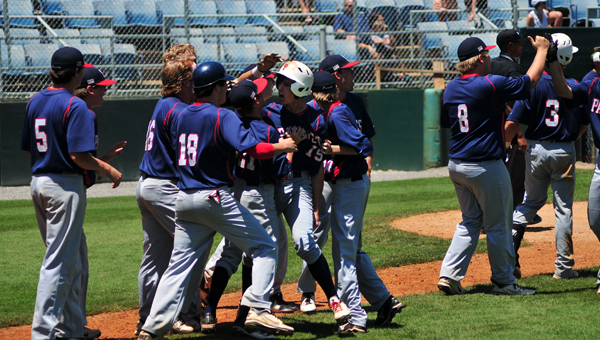 With Pike Liberal Arts trailing Tuscaloosa Academy 10-1 and the team feeling helpless to watch as the outs and opportunities slipped away, Chandler Avant laced a solo home run to lead off the fifth inning.

At the time, one run seemed to make little difference but pitch by pitch, batter by batter the Patriots started winning the little battles that they had lost in the first four innings of Game 3.

“It was a big help,” catcher Blake Floyd said. ‘It got the dugout back on its feet and into the game.”

At this point Tuscaloosa can feel the heat and pressure of a state championship slipping away. Pike Liberal Arts, still with no one out, has new life.

The Patriots dugout and section of fans are beside themselves and leaving imprints in the concrete foundation of Paterson Field. Cheers are reverberating off the ivy embankment in right field.

McLaughlin walks to re-load the bases. Floyd walks to force in the go-ahead run. Barnes follows with a run scoring base on balls – 12-10 Pike.

After Tuscaloosa changes pitchers for the third time in the inning, Starling and Harris plate runs with consecutive sacrifice fly balls – 14-10.

Newman singles to score Barnes to make it 15-10.

Avant, batting for the third time in the inning, hits a deep fly ball to left field down the line that Tuscaloosa is able to track down at the warning track to finally end the inning.

The damage had been done, both physically on the scoreboard and mentally.

Tuscaloosa’s Clay Thomas, who finished 3-for-4 on the game, led off the seventh with a single to give the Knights some hope. Pike could smell victory, however.

The next batter ripped a fastball into center field but McLaughlin made a spectacular diving catch for the out. A strikeout later, Stewart got Jon Boyd to loft the first pitch he saw into right field where Dustin Newman called loudly for the ball and safely secured it with two hands to ensure the title for the Patriots.

Without a doubt, an inning to remember.