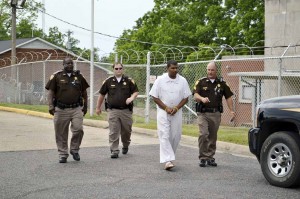 Andre Ellis III walks to his court appearance on Tuesday.

The man accused of raping two women in Hunter’s Mountain Mobile Estates on March 26 sat quietly in a courtroom Tuesday afternoon with his feet and hands bound together.

Andre Lamon Ellis, III, 35, was arrested on April 25 – just one day shy of the one-month anniversary of the crimes he is accused of committing. Ellis is facing two counts of first-degree rape and one count of second-degree burglary.

Police said the man lived in Hunter’s Mountain and owned Good Deeds Auto Detailing which was less than a mile from the mobile home park’s entrance.

The first victim was at the hospital when McLendon was called to investigate a rape that happened between 3:30 and 4:30 p.m. on March 26.

McLendon said the victim reported that she opened her door expecting to see Hunter’s Mountain security, or her roommate and instead found a black man wearing black baggy pants and a dark shirt.

“[The man] walked in and told her the best thing to do was to not say anything,” McLendon said.

The Troy University student underwent surgeries for injuries suffered during a sexual assault, according to testimony.

McLendon said the victim was scared because he told her “he knew where she lived and he’d come back.”

Police were notified on March 31 just before 6 p.m. that there had been a second rape at Hunter’s Mountain on March 26 between 7:30 and 8 p.m.

The victim reported to police that she was getting clothing out of the trunk of her car when she noticed someone approaching from the side.

McLendon said the victim wasn’t friends with Ellis, but she recognized him when he began making small talk with her. The victim told police she began to gather her things more quickly when Ellis came near.

He grabbed her and dragged her behind a trailer before sexually assaulting her.

“She advised us that she was scared. She was embarrassed and she was scared of what her father would do,” McLendon said, elaborating that the woman didn’t want her father to do something that would put him in jail and that’s why she didn’t immediately identify her attacker.

McLendon relayed to the courtroom that the rape suspect told the second victim she shouldn’t tell anyone what happened because he was in the military and no one would believe her.

He said, “If she called somebody, he’d be watching and know if the police came,” McLendon said.

Both victims identified Ellis by photo line-up. It was about the sixth line-up the first victim had been asked to review, and it was the first line-up for the second victim.

When the first victim saw Ellis’ photo she was certain he was the man who attacked her, McLendon said.

“She said she was positive. She would never forget his face,” the detective said.

Detectives collected clothing from the women, along with hair from the first victim’s home. They also sent some of Ellis’ clothing for forensic analysis, but no results have come back yet.

Ellis will go before the Grand Jury on July 31.

For a video of Ellis before and after his court appearance, click here.