Underclassman comes through in clutch for Pike 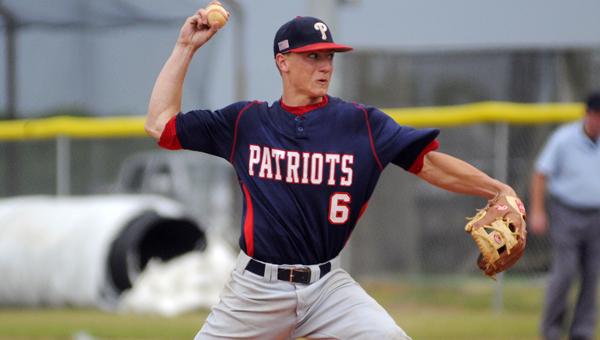 Seventh inning, one out, bases loaded, and a state championship berth on the line. Pike Liberal Arts head coach Butch Austin is forced to make a pitching change with his team leading the two-time defending AISA state champion Glenwood 8-4 but the tying run is at the plate.

There was one player who wanted the ball more than any one else, sophomore Chandler Avant.

For most perennial title contenders, a sophomore would be settled quietly on the bench, running foul balls or keeping the pitching chart. Avant, however, got the ball with the game on the line and with the full confidence of his coach.

“I knew he wanted it,” Austin said. “He always wants it.”

Avant took his warm-up tosses and with seven pitches dispatched the top two batters in Glenwood’s lineup. Not only did he retire them in order to clinch a trip to Patterson Field in Montgomery to face Tuscaloosa Academy, he struck them out – and with authority. Avant got Will Allison swinging using a blazing fastball that the Gator leadoff hitter could barely clip foul twice earlier in the at bat. Chase Silvani went down on a knee-buckling breaking ball that seemed to disappear into thin air.

“I didn’t know if coach was going to hand me the ball,” Avant said of the meeting on the mound before relieving Taytom Barnes. “Once he called my name I knew what I had to do.”

Austin had no hesitation in making the move after Glenwood had loaded the bases.

Despite pitching just seven innings the entire regular season, Avant, who is also Pike’s leadoff hitter, leads the team in saves, with five, and earned the win on the mound in Game 1 by pitching the final two innings in a 7-6 victory.

Situations like that of Wednesday’s don’t fall on a tenth-grader often, but Avant took it in stride.

“I had some butterflies because we were so close to closing it out,” he said. “I just wanted it to be over.”

With the win, the Patriots not only head to their third consecutive AISA state championship series but finish undefeated at Butch Austin Field for the fourth straight season. Pike has also beaten the rival Gators, who defeated Patriots the past two years in the title game, five times this year.

Pike will face Tuscaloosa Academy, who beat Prattville Christian in the other semi-final matchup, in the first game of the best-of-three series at 10a.m. on May 9.