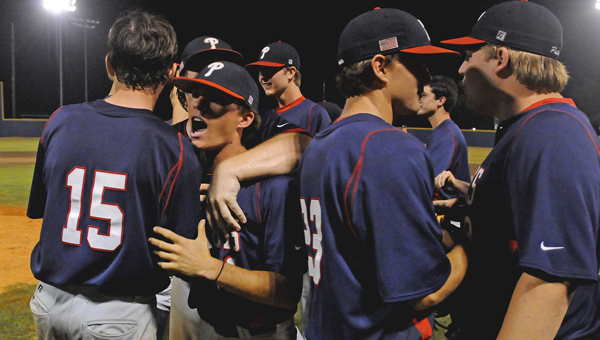 For the third consecutive year, Pike Liberal Arts will head to the Alabama Independent School Association State Championship Series. This time, however, the Patriots will not have to face Glenwood. Pike defeated the Gators in the semi-finals by the scores of 7-6 and 8-4 to advance to the finals.

With the bases loaded in the seventh and the score tied 6-6 in Game 1, Reid Dickey chopped a 3-2 pitch over the head of Glenwood shortstop Lance Ford to hand Pike a 7-6 victory.

With rain clouds looming, Glenwood got off to a hot start as Will Allison led off the game with a solo home run. The Gators would string together three consecutive singles capped by Cody Watson’s RBI chopper up the middle to extend the lead to 2-0.

Allison, who finished the game 3-for-4, doubled in the second and would later score on Matthew Kuhlenberg’s single. Glenwood pounded 11 hits off Pike starter Blake Floyd but would strand five runners in the first two innings. Floyd would allow four runs with four strikeouts and two walks in five innings on the mound.

The Gators had an opportunity to add to their lead in the fourth when Logan Kiker led off the inning with a single before Allison reached on a bunt that caught the Patriots off guard. With Kiker standing at third, Kuhlenberg lofted a fly ball to left center field. Barnes ranged over to make the catch and fired a bullet to catcher Nick McLaughlin who applied the tag to end the threat.

Kuhlenberg would keep the Patriots bats silent through the first three innings before Pike struck in the fourth.

Nick McLaughlin led off the inning with a single. Blake Floyd and Taytom Barnes followed with consecutive doubles to bring Pike within one, 3-2.

The Patriots exploded for four runs in the fifth inning taking advantage of four walks by Kuhlenberg and RBI singles from Floyd and Barnes. Pike led at that point 6-3.

Kuhlenberg finished seven strikeouts and seven walks in six innings of work on the mound.

Chad Silvani laced a solo home run in the sixth before Glenwood would score on a Pike throwing error in the seventh to cut the deficit to 6-5. Silvani, who was 2-for-3 for the game, would come through again for the Gators, ripping a single to tie the game.

Stewart Kite, who relieved Kuhlenberg, walked Floyd to open the bottom of the seventh. Josh Starling quickly followed with a double. After an intentional walk was issued to Dalton Harris, Dickey then ended the game with the bounder into left field.

Game 2 was delayed for 95 minutes due to rain after the first inning.

Before the delay, Pike’s Lawson Stewart launched a solo home run off Glenwood starter Kyle Rovig to give the Patriots an early 1-0 lead.

Glenwood would score four runs in the third despite producing just one hit. Pike Liberal Arts starter Josh Starling would walk three batters in the inning and hit two more before a strike out ended the frame.

Trailing 4-2, Pike tied the game in the fourth. Starling led off with a double and would later score on a bases loaded walk. Dalton Harris, who was walked following Starling, would score to knot the game on a fielder’s choice.

Nick McLaughlin would plate two in the sixth to give Pike a 6-4 lead. Ried Dickey added another one inning later with a RBI two-bagger of his own.

The Patriots will face Tuscaloosa Academy in the state finals at Patterson Field in Montgomery on May 8.