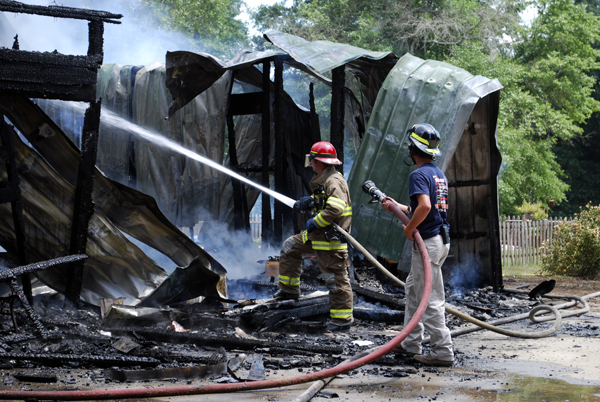 Green watches as his parents’ house is destroyed by fire

David Green watched as his childhood home was ravaged by flames Monday afternoon.

Firefighters from five different departments responded to the home of Green’s parents, David and Diana Johnson, at 1438 County Road 5518 shortly before 1 p.m.

The blaze consumed most of the home as the tin roof intensified the heat inside the structure, firefighters explained. A truck parked at the house also caught fire, bubbling the windshield tinting and destroying headlights. Firefighters pulled the truck away to separate it from the fire.

Green said his mother had gone for lunch at his grandmother’s home, so no one was inside the house when the fire started. Even the dog was outside, safe from the flames and smoke.

Green works and lives in Troy and hurried to the fire after hearing the news.

“I knew it would be bad when I got here,” Green said, staring up at what once was his bedroom. “When I was at the red light by Santa Fe, I could see the smoke all the way in Troy.”

Firefighters worked in shifts to avoid heat exhaustion. Sneed said. Although no one was injured, the heat was so powerful it singed the hair off of one of his firefighter’s hands.

An hour after arriving on scene, firefighters continued working to extinguish flames in the attic. The blaze would have been easier to battle, Sneed said, had first responders been able to get fire trucks to all sides of the house.

The incident is under investigation, but Sneed said early indicators place the fire’s origin in a game room on the first floor of the home. He said, even though he has seen many fires, it is still rough to watch a family lose their house.

“When I was in eighth grade I lost my house to a fire,” Sneed said. “It is hard to watch your house go up in flames with everything you own. You have to start over. I really feel for them.” 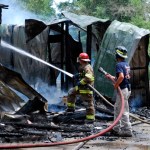 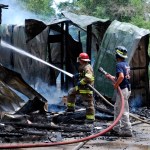 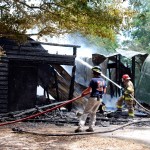 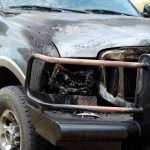 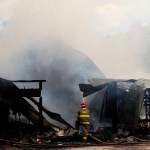 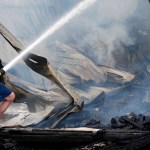 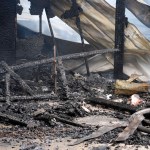 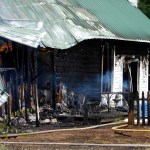