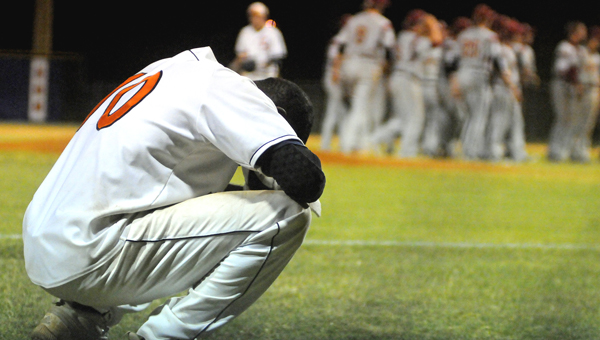 Charles HendersoA Charles Henderson player reacts after a game in the second round of the AHSAA baseball playoffs in Troy, Ala., Friday, April 27, 2012. Russell County won 7-5, 7-3 in the doubleheader to eliminate Charles Henderson. (Messenger Staff Photo/Thomas Graning)

“(Russell County) did what great teams do, they took advantage of our mistakes,” Charles Henderson head coach Derek Irons said. “It just wasn’t our night. The margins are very thin against teams that are that good. We just weren’t quite good enough tonight.”

Russell County pounded out 12 hits off of Trojans starter Houston Mabray in game one to take a 7-5 victory.

Mabray struck out three batters and walked four in his seven innings. 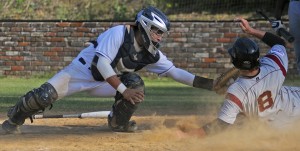 Charles Henderson's Chase Smartt tags Russell County's Jesse Nelson out at home during a game in the second round of the AHSAA baseball playoffs in Troy, Ala., Friday, April 27, 2012. (Messenger Staff Photo/Thomas Graning)

Trailing 7-1 in the seventh with the bases loaded, Joey Denison launched a 1-1 pitch over the wall in left field to give Charles Henderson its lone offensive highlight of the game as the Trojans would produce just four hits in the opener.

In four playoff games, the Trojans top four hitters combined for a .142 average.

“We saw three good pitchers tonight,” Irons said. “We knew going in that we would have to score runs and we did in bunches but we weren’t able to find the consistency to get a big hit or a run when we needed it.”

Charles Henderson didn’t help themselves much offensively either, committing seven errors in the two games.

Charles Henderson would get on the board in the sixth when Chase Smartt, who reached base on a single, scored on Tripp Blackmon’s triple to center.

The Trojans would tack on two more runs in the inning to cut the deficit to 6-3. With the tying run at the plate, Anfernee Grier relieved starter Jesse Nelson and got Jalin Lawson to fly out to end the inning.

Blackmon went six innings on the mound for the Trojans allowing seven runs – four earned – on six hits. Blackmon struck out three and walked five in the loss.

Charles Henderson ends the season 26-9 and is eliminated by the Warriors for the second consecutive season.

“We all feel like we could played better,” Irons said. “It’s going to be disappointing for the next few days but as time goes on, I think these guys will look back on this season and be proud of what they accomplished.”