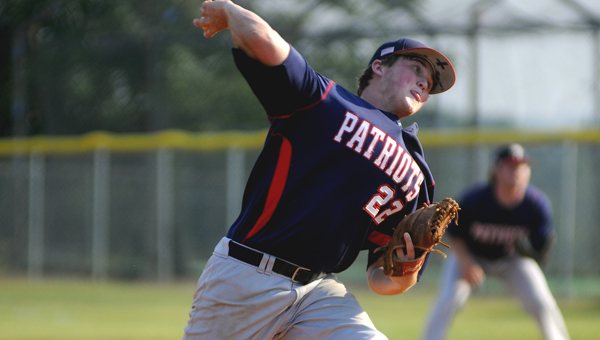 It wasn’t pretty but it was definitely one-sided.

The Patriots did not allow a single run in two games, defeating Bessemer 6-0, 10-0.

“I don’t remember the last time I saw that happen,” Floyd said after the game. “Everyone pitched well today.”

Everyone indeed. In all, the Patriots pitching staff allowed seven hits in the two games.

Josh Starling got the start in game one and went six innings in picking up the win. Starling struck out five and walked three.

Chandler Avant struck out two in his inning of relief.

Scoreless through 2 1/2 innings, Pike broke through in the third when Stewart’s sacrifice fly scored Avant to give the Patriots a 1-0 advantage.

On the back of a solo home run from Avant and Floyd’s 2-RBI single, PLAS would score four runs in the fifth to extend teh lead to 5-0.

Dustin Newman would add some insurance one inning later with a solo home run of his own.

Avant would finish 3-for-4 in the game while Nick McLaughlin was 2-for-3.

In game two, Pike jumped ahead of the Rebels early with a four-run first inning.

The Patriots added three more and would cruise to the 10-0 victory.

PLAS took advantage of seven Bessemer errors in the nightcap to earn a spot in the AISA semifinals.

Barnes led the Patriots at the plate going 2-for-3.

Glenwood School, who has defeated the Patriots in the last two state championship series, beat Morgan Academy to earn the right to travel to Troy on May 2.

“We feel confident against them at home,” Floyd said. “We’ve beat them three times this season and will be ready to play them again. They have a great team but so do we.”

Game time for the Wednesday doubleheader from Butch Austin Field is set for 4p.m.