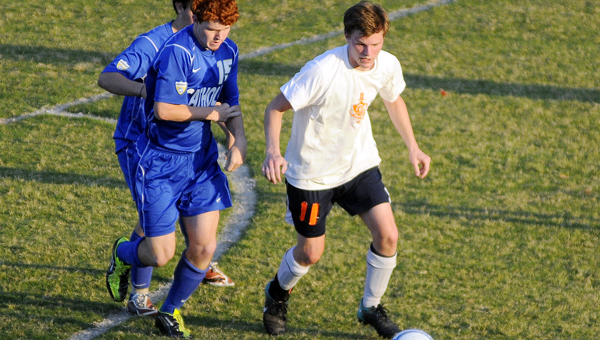 “Senior night! Senior night!” was the chant on the soccer field Thursday night as Charles Henderson honored their three seniors: Scott Kelly, Skylar Sexton and Nathaniel Salmon in their final home game of the season against Montgomery Catholic. The Trojans took control of the game early but could not slow a late offensive charge by Montgomery Catholic late in the game and would only come away with a 2-2 tie.

Charles Henderson took a quick 1-0 lead early in the seventh minute of the match off the foot of Ben Salmon who was able to complete a pass from brother goalkeeper Nathaniel Salmon. The lead carried the Trojans into the second half where they expanded their lead to 2-0 with a header by Robert Salmon on a corner kick from Mitchell Mobley in the 62 minute.

With victory in sight the Trojans who dominated their opponent with possession all match began to struggle against a late attack from the Montgomery Catholic offensive charge. In the 77 minute Montgomery Catholic finally found their way to the goal around Charles Henderson’s keeper Salmon, who totaled 10 saves in the match, to cut the Trojan’s lead down to 2-1.

The biggest play of the night would come in stoppage time as Charles Henderson’s defense fell short in maintaining the Montgomery Catholic surge and giving up the equalizing goal on an own goal in the 85 minute of the match.

The Trojans would have to settle for a 2-2 tie in their final home game of the season.