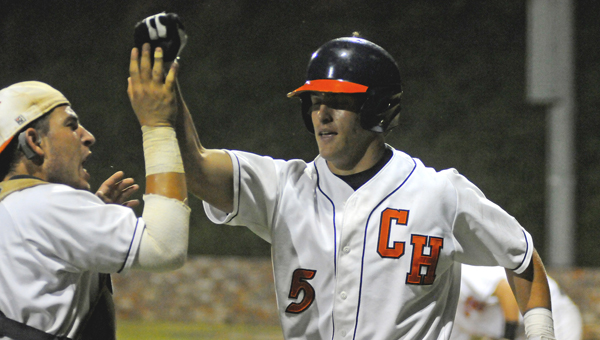 Charles Henderson's Chase Smartt (6) congratulates Joey Denison (5) after Denison scored during a game in the first round of the AHSAA baseball playoffs in Troy, Ala., Friday, April 20, 2012. CHHS beat Tallassee 3-2, 3-0 to win the doubleheader and advance in the playoffs. (Messenger Staff Photo/Thomas Graning)

“I can’t imagine there were two better pitching performances than our two guys and their two guy in the entire state tonight,” he said.

The team’s starters combined to allow just 18 combined in 15 innings of play.

The Trojans (26-7) defeated Tallassee 3-2 in eight innings in game one. CHHS would need three runs in the top of the seventh to down the Tigers in game two, 3-0.

“I can’t tell you how proud I am of the way this team finishes games,” Irons said. “From game one, this team has finished games and they did it again twice tonight.”

Joey Denison worked a leadoff walk after falling behind in the count 1-2. After Chase Smartt successfully landed a sacrifice but to advance the runner to second, Tripp Blackmon delivered the hit, a single to right field, to score the game winning run.

The Trojans took the early lead in the second inning when Austin Adler, who was 2-for-3 in the game, doubled home Blackmon with two outs.

Tallassee would tie the game in the fourth on a two-out RBI single by catcher Jed Carter on an 0-2 pitch.

Charles Henderson regained the lead in the following inning on a sacrifice fly by Denison, scoring Michael Fox to make the score 2-1.

The Tigers again knotted the game in the sixth with a sacrifice fly of their own from Jesse Rowlen to score Josh Highland, who scored both of Tallassee’s runs in the game.

Mabray said the he used the ground ball to his benefit.

“A lot of them,” Mabray said. “I was keeping my fastball down and getting them to roll over. Our defense did a great job too.”

Tallassee starter Shawn Thomas allowed just six hits but seven walks cost the right-hander as all three of the Trojans runs were scored by runners that reached base via the free pass.

Game two featured an even better mound outing than the first game but it was an offensive play that stole the show.

Scoreless heading into the seventh inning, neither pitcher seemed ready to bend much less break.

Joey Denison again came to the plate to lead off the inning with the game on the line and just as in game one, drew a walk.

Chase Smartt failed on his first two attempt to get down a sacrifice bunt but with an 0-2 count pushed a beauty between the pitcher’s mound and first base, out of reach of any defender. Tripp Blackmon laced what appeared to be a catchable, deep fly ball. The Tallassee center fielder drifted, however allowing the ball to get over his head. Denison, who was prepared to tag up at second could only advance to third. That set the table for Luke Hastings.

Hastings was in a similar situation earlier in the year when he missed the squeeze signal, resulting in the runner at third being tagged out. This time, however, would be different.

Hastings laid down a perfect bunt on a 1-1 pitch to score Denison and give the Trojans a 1-0 lead.

Charles Henderson would tack on two more to earn the 3-0 win and the right to face Russell County in the second round.

Blackmon struck out four over seven innings of work on the mound and finished the game 2-for-3 at the plate to lead CHHS.

Austin Ingram singled in the third inning to cap the Trojans offensive output.

Charles Henderson will host Russell County in the second round which begins April 27.

The Trojans were swept out of the playoffs by Russell County last season.