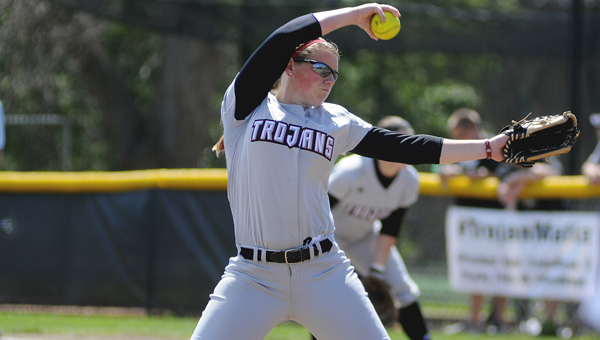 Seldom does she know what time the game starts. She may not remember what uniform the team planned on wearing. Never does she recognize that the hitter on deck was an All-American last season… nor does she care. Troy freshman pitcher Ashley Rainey takes the ball and throws whatever the catcher calls.

“I find the more I think, the more I psych myself out,” Rainey said. “This year, it’s been an ignorance is bliss type thing. I don’t know who the big hitters are, I just go out there and throw. After the game you find out we beat this big team or that rival. I just try not to out-think myself.”

That mind set has paid off for the right-hander from Tuscaloosa. Through 22 starts, Rainey is 14-8 and stands fifth in the Sun Belt Conference with a 2.52 ERA and leads the league with 155 1/3 innings pitched.

Her performances have been superior enough to land her Sun Belt Conference Pitcher of the Week honors three times.

“It’s been very humbling,” Rainey said. “I didn’t even know things like (awards) existed when I came to Troy.”

“I would venture to say we were one of the hardest working teams in the state,” Rainey said. “I was thankful for that when I got to college. It helped me prepare for what we’re doing now.”

Rainey has been the Trojans go-to arm this season defeating then No. 21 Auburn and No.8 Louisiana-Lafayette in consecutive starts. She also got starts against LSU and Purdue and pitched three innings in an early season game against then No. 6 Missouri.

“The first game I remember really looking around was against LSU and there’s purple and gold all around the field and in the stands,” she said. “You’re not really supposed to let that affect you but I had to take it in just a little bit.”

The atmosphere on the bayou didn’t affect Rainey as she pitched 6 2/3 innings of solid softball, picking up a 1-0 hard-luck loss.

Rainey said award are nice but winning is the ultimate goal. Currently, the Trojans are 27-16 overall but 7-9 in Sun Belt play, good enough for sixth in the conference standings. Rainey is planning on taking things one game at a time in an effort to help her team rise in the standings before the Sun Belt Conference tournament begins on May 9.

“We just have to concentrate on the game at hand,” she said. “Once you get past that one, move on to the next one. If you try to think about the rest of the season, you can get overwhelmed.”

Troy will face off against No. 22 Florida State on Thursday at the Troy Softball Complex. Game time is set for 4p.m.