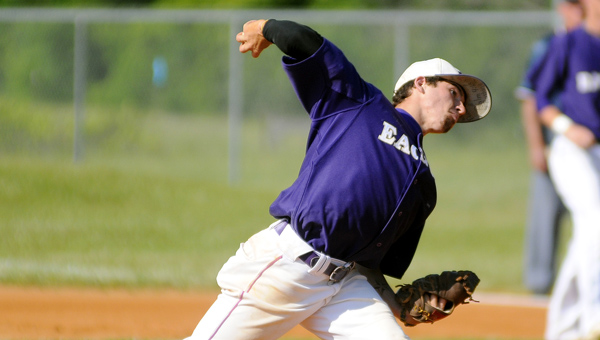 With a first round playoff showdown looming against Leroy, the Goshen High School Eagles baseball team will be looking to the strength of its players to keep their season alive.

Perhaps one of the biggest figures of the Eagles lineup will be junior Austin Rushing who, in his first season in a Goshen uniform, has been a dominating presence on the field.

Rushing arrived at Goshen after a transfer from Pike County High School, where he had already built up a relationship with Eagles head coach Robby Kinsaul.

“I already knew coach Kinsaul before I transferred,” Rushing said. “I talked my parents into letting me change schools and I knew there was a lot I could learn. We’ve all managed to turn the program around and it’s a good group of dedicated guys. We’re still trying to get better but we’ve had a really good season.”

For the Eagles, Rushing is a multi-dimensional player capable of putting time in at a variety of positions including pitcher, catcher, shortstop and second base.

As one of the main pitchers for the Eagles, he has registered double digit strikeouts on five occasions this season, most recently in a 4-3 loss to New Brockton on April 13, where he struck out 10 batters in seven innings of work.

The loss was one of only two for Rushing in his seven starts on the mound, the other coming against Luverne, a game where he struck out 15 batters.

“At our level he’s really good,” Kinsaul said. “He has a good fastball and has a good offset curveball. That curveball is in my opinion his best pitch; anyone can hit a fastball so it’s good to have that secondary throw. It can be a big weapon and he uses it well.”

Rushing has proved a dual threat with a 2.96 ERA on the mound, coupled with a .438 batting average when he is at the plate.

Rushing also gets time in at catcher for the Eagles on occasion, rotating in with the other primary pitchers on the team: Rob Boutwell, Jared Maddox and Russ Thomas.

“We usually try to rotate Austin in at catcher,” Kinsaul said. “He’s a good wall and can block the ball well. Not many players will try and run on him when he’s behind the plate.”

Rushing has been hard at work since arriving at Goshen, and with his senior year approaching he’s been preparing for another successful season for the Eagles along with his teammates.

“I would like to have another good season next year,” he said. “We’re going to lose four seniors but we’ve also got a lot coming back. I hope I can play well and maybe even have some colleges take a look at me but right now we’re just going to keep working and maybe get back to the playoffs again.”

The Eagles will play the first round of the state playoffs on the road against Leroy in a double header on Friday, April 20, with game one starting at 4 p.m. and game two at 6:30 with a third game on Saturday if necessary.