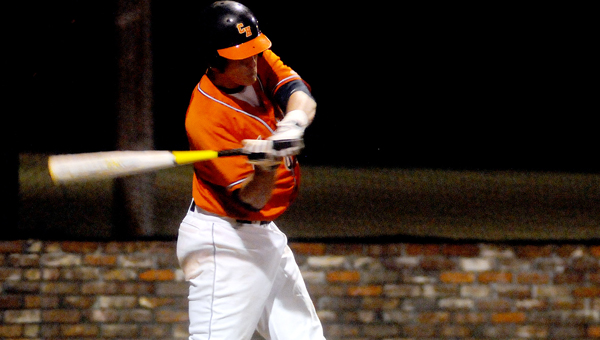 Charles Henderson's Joey Denison takes a swing at the ball during a baseball game in Troy, Ala., Thursday, March. 1, 2012. (Messenger Staff Photo/Thomas Graning)

Joey Denison’s demeanor on the field is one of calming intimidation. The Charles Henderson first baseman is low-key yet encouraging to teammates and a nightmare for opposing pitchers.

With a quick and powerful swing, Denison has helped lead the fifth-ranked Trojans to a 24-7 regular season record, a perfect 6-0 area mark, and the team’s second area championship in three seasons.

Denison, who lead the team with 46 RBI, has been the driving force behind an offense averaging eight runs per game but the junior feels little stress in being one of the guys teammates look upon to produce.

“I don’t feel any pressure, it doesn’t make me too nervous (when runners are on base),” Denison said. “It doesn’t feel like I have to do too much. I’m just swinging, I’m just batting.”

Whether it’s as simple as ‘just’ swinging or not, the Trojans’ clean-up hitter has put together a stellar season at Frazier Field. Denison is second on the team in batting average (.447), trailing Jalin Lawson by a single point, and in home runs (6). He leads the Trojans in RBI and singles while striking out just 12 times.

“Joey has been our most consistent player without a doubt,” Charles Henderson head coach Derek Irons said. “He’s been big for us this year, he’s been great.”

Irons has been just as pleased with Denison’s glove as his offensive output.

“He’s driven in a lot of runs and has a great average but he has been incredible at first base,” Irons said. “Joey had never really played first base before this year and has taken on that challenge and played incredibly well. His defense has been almost as impressive as his offense.”

Batting second in the order and in front of Denison has given teammate Michael Fox the opportunity to cross the plate on a regular basis.

“It makes you feel good to be on base and have a guy up there that you can count on,” Fox said. “I can’t remember too many times that he hasn’t got the job done. He’s come along lately and has started to show out a little bit.”

“I’m just looking to get ahead in the count so I can get a good pitch and take a full swing,” Denison said. “Getting more live at bats and seeing more pitching has helped me get in a grove lately. Hopefully, it can carry over into the playoffs.”

The Trojans host Tallassee High School in the first round of the Alabama High School Athletic Association state playoffs on Friday and Denison isn’t expecting the offense to slow down.

“Overall, we want to go deep into the playoffs, we think we have a team that can win state,” he said. “We want to be like the 2004 state championship team and get our name up on the wall.”

Charles Henderson will kick off the best-of-three series with Tallassee on Friday with a doubleheader set for 4:30p.m.