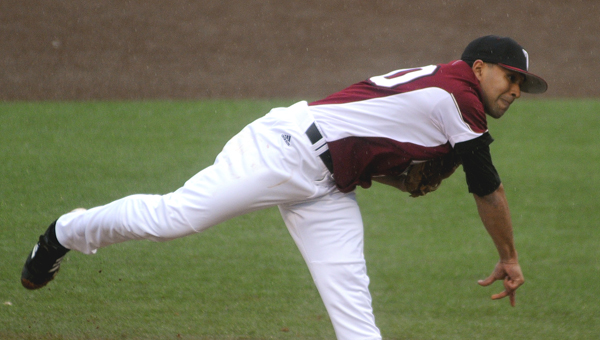 After a painful 3-10 start in conference play the Troy baseball team finally won its first conference series of the season, taking two of three from Middle Tennessee State over the weekend.

“We’re at a time where we can’t afford to take any more steps back, we’ve got to keep moving forward,” Troy head coach Bobby Pierce said. “We played probably our best weekend series. We’re hopeful that momentum will carry into this week and on into the weekend.”

Joe Hernandez’s eight strikeout performance over 6 1/3 innings in the Trojans 6-2 win on Saturday earned the junior Sun Belt Conference Pitcher of the Week honors while Danny Collins garnered the Player of the Week award after batting .438 (7-for-16) with a double, triple, two home runs, and nine RBI.

A 10-3 victory on Sunday coupled with Tuesday’s 15-7 shelling of rival Jacksonville State helped the Trojans to a 3-1 record for the week. Troy averaged 10.3 runs in the four games.

“Seeing us take advantage of the innings we had build was a good sign,” Pierce said. “We’ve had some series where we left some opportunities out on the bases so seeing those runs scoring is certainly something we’ve been waiting to see. You’re not going to knock them all in but you’ve got to get your share.”

Prior to Tuesday’s victory over Jacksonville State, the Trojans had been on a six game skid and were 2-8 in their previous 10 games.

At 16-19 overall and 5-10 in conference play, Troy is hoping to climb in the Sun Belt standings in the five remaining conference series heading into the Sun Belt tournament. The Trojans are currently tied for last with Louisiana-Monroe and Arkansas-Little Rock. Troy plays ULM at Riddle-Pace Field in a three-game set beginning May 11.

The Trojans will now turn their attention to a Tuesday night matchup with a struggling Auburn (19-16, 7-8 SEC) squad. The Tigers are reeling since being swept by Alabama in a three-game conference series in early April. Since that series, Auburn in 2-5 in its last seven games.

Despite Troy and Auburn having met each year since 1992, the Tigers coaching staff have chosen not to continue the series in the near future. The teams will not play in 2013 and while the Troy staff is pursuing a renewal for future seasons, no agreement is in sight.

Auburn owns the series advantage with a 35-16 mark against the Trojans. Troy is 7-10 against the Tigers under Pierce.

Troy received strong starts from Hernandez and Ryan Brady over the weekend and hope that will carry over into the remaining schedule of games.

The Trojans began the year with their Friday and Saturday starter seemingly locked in place but with the struggles of Jimmy Hodgskin (1-1, 7.14) and several injuries have been forced to dip deeper into the pitching staff for quality starts.

“There have been several issues surrounding the inconsistencies and changes,” Pierce said. “Hopefully, the changes we’ve made will continue to be consistent for us and give us a chance to be strong down the stretch.”

Troy will head to Plainsman Park to face off against the Tigers Tuesday will a 6p.m. start.

Troy defeats MTSU to even series